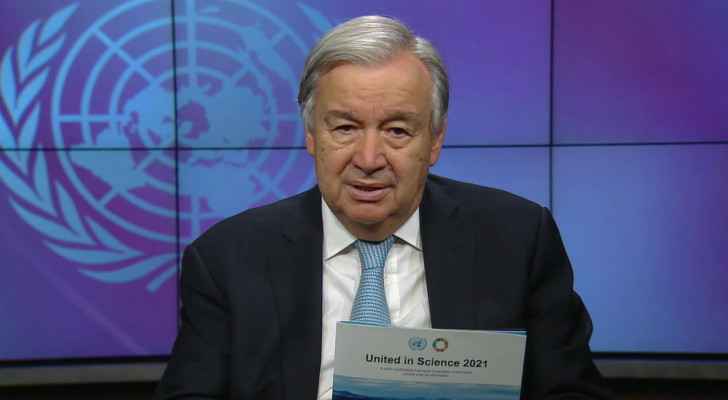 The United in Science 2021 report, published by a range of UN agencies and scientific partners just weeks before the COP26 climate summit, said climate change and its impacts were accelerating.

And a temporary reduction in carbon emissions caused by the coronavirus pandemic had done nothing to slow the relentless warming, it found.

The 2015 Paris Agreement on climate change, struck at the COP21 summit, called for capping global warming at well below 2 C above the pre-industrial level, and ideally closer to 1.5 °C.

United Nations Secretary-General Antonio Guterres said the report's findings were "an alarming appraisal of just how far off course we are" in meeting the Paris goals.

"This year has seen fossil fuel emissions bounce back, greenhouse gas concentrations continuing to rise and severe human-enhanced weather events that have affected health, lives and livelihoods on every continent," he wrote in the report's foreword.

"Unless there are immediate, rapid and large-scale reductions in greenhouse gas emissions, limiting warming to 1.5 °C will be impossible, with catastrophic consequences for people and the planet."

Fossil greenhouse gas emissions peaked in 2019, shrinking by 5.6 percent in 2020 due to the COVID-19 restrictions and economic slowdown.

But outside aviation and sea transport, global emissions, averaged across the first seven months of 2021, are now at about the same levels as in 2019.

And the report said concentrations of the major greenhouse gases -- carbon dioxide, methane and nitrous oxide -- continued to increase in 2020 and the first half of 2021.

Overall emissions reductions in 2020 likely shrank the annual increase of the atmospheric concentrations of long-lived greenhouse gases, but the effect was "too small to be distinguished from natural variability", it said.
The global average mean surface temperature for 2017 to 2021 -- with this year's data based on averages up to June -- is estimated to be 1.06 °C to 1.26 °C above pre-industrial (1850-1900) levels, the report said.

The global mean near-surface temperature was meanwhile expected to be at least 1 °C over pre-industrial levels in each of the coming five years, with a 40-percent chance it could climb to 1.5 °C higher in one of those years, it said.

Guterres said the world had reached a "tipping point", and the report showed "we really are out of time".

Also Read: China announces that it has fully vaccinated more than one billion people

World Meteorological Organization chief, Petteri Taalas, warned that in the worst case scenario, sea levels could rise by up to two metres before 2100 if the Antarctic glacier melts more quickly than expected.

The report said that in 2020, an estimated 267 million people -- four percent of the world's population -- were living within two metres above sea level.

Mohamed Nasheed, the Maldives former president and current speaker of parliament, told a meeting in Geneva that low-lying island states were now “under stress to the extent that we
might not have an island, or a country.”

The report said the increasing number of countries committing to net-zero emission goals
was encouraging, with about 63 percent of global emissions now covered by such targets.

But, it said, far greater action was needed by 2030 to keep those targets feasible and credible.

Calling for all countries to commit to net zero emissions by 2050, Guterres said: "I expect all these issues to be addressed, and resolved, at COP26."

"Our future is at stake."

Syria to sign Paris Climate Change accord leaving only US ....