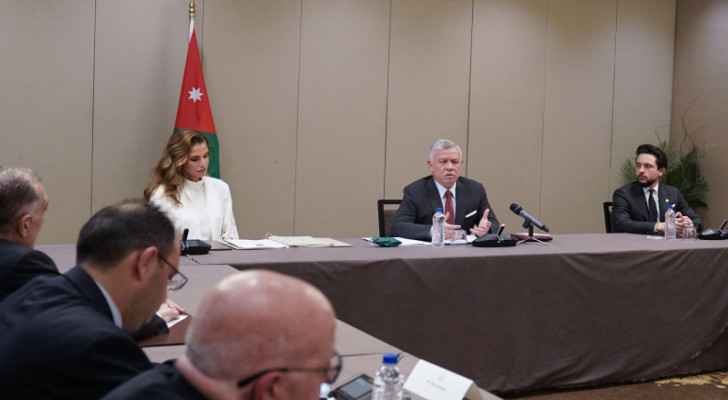 At a meeting with representatives of Arab American organizations and leading Arab figures in New York, attended by Her Majesty Queen Rania Al Abdullah and His Royal Highness Crown Prince Al Hussein bin Abdullah II, King Abdullah commended the Arab community in the US, and their effective role in communicating Arab positions to US decision makers.

The meeting covered regional and international developments, especially in Arab countries, foremost of which is the Palestinian cause.

His Majesty stressed that the region cannot reach security and stability without a just and comprehensive solution to the Palestinian issue, based on the two-state solution that guarantees the establishment of an independent Palestinian state on the 4 June 1967 lines, with East Jerusalem as its capital.

Discussions also covered global and regional economic challenges, especially with the spread of the COVID-19 pandemic.

The King noted the investment opportunities offered by the region, urging leading Arab figures in the US to encourage investors to come to Arab countries.

Moreover, the meeting addressed the situation of refugees in the region and the burden shouldered by host countries, especially amid a drop in support from donor countries and the international community.

For their part, the attendees commended Jordan’s role in defending Arab causes, especially the Palestinian cause, expressing appreciation for His Majesty’s leadership at the Arab and international levels.

The King’s meeting with Arab American figures came as part of a number of meetings His Majesty is holding in the United States, which also included leading business people from various sectors, including tourism, investment, and industry.

Bill Clinton to spend another night hospitalized for ....