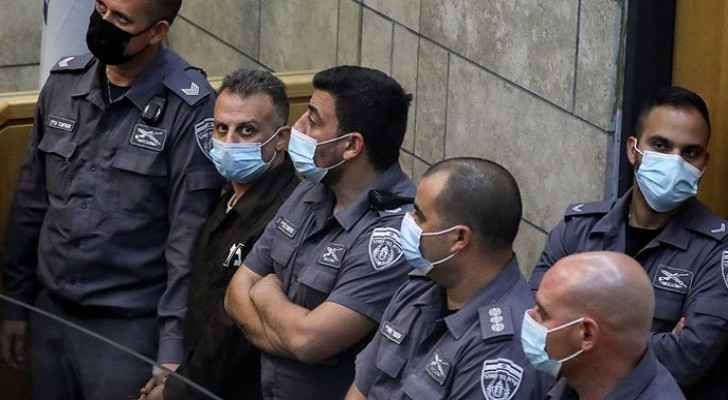 Wednesday, lawyer of the recaptured Palestinian prisoner Yaqoub Qadri said he told her the best days of his life were the ones he spent free and in the open air of Palestine.

The lawyer added that Qadri told her that he is in high spirits.

He is proud and thankful of the Palestinian people for standing by them and thanked the activists who demonstrated in front of the Nazareth court for them, the lawyer reiterated.

Qadri is being held in a 1x2 cell room that lacks all necessities and only contains a blanket, according to his lawyer.

She added all he asked for was a copy of the Holy Quran.

Qadri is still under investigation and his investigators are psychologically torturing him.

Meanwhile, The Commission for Detainees and Ex-Detainees Affairs reported that lawyer, Avigdor Feldman, visited Zakariye Zubeidi Wednesday afternoon and found that Zubeidi was assaulted during his re-arrest which resulted in a broken jaw, two broken ribs, bruises and scratches.

He was transferred to a hospital and only given painkillers.

Zubeidi explained to his lawyer that during the days they were free, they did not ask for help or food from anyone, out of concern for Palestinians and to keep them from any harm that might befall them.

They barely drank water and only ate fruits found in the orchards such as figs and prickly pear, Zubeidi told his lawyer.

The Commission for Detainees warned the Occupation against continuous isolation of the four prisoners and their placement in difficult and inhumane conditions, in addition to the torture and ill-treatment they are facing by the interrogators.

Moreover, lawyer Raslan Mahajna said that Mahmoud Arda told him he was the one responsible for the prison break and that the digging of the tunnel started in December 2020.

AOC cries after House of Representatives ....

AOC cries after House of Representatives ....

Brother of an escapee from Gilboa prison speaks ....

Brother of an escapee from Gilboa prison speaks ....

Brother of an escapee from Gilboa ....