MP to Health Minister: 'If you cannot handle the issues of the ministry, submit your resignation'

MP to Health Minister: 'If you cannot handle the issues of the ministry, submit your resignation' 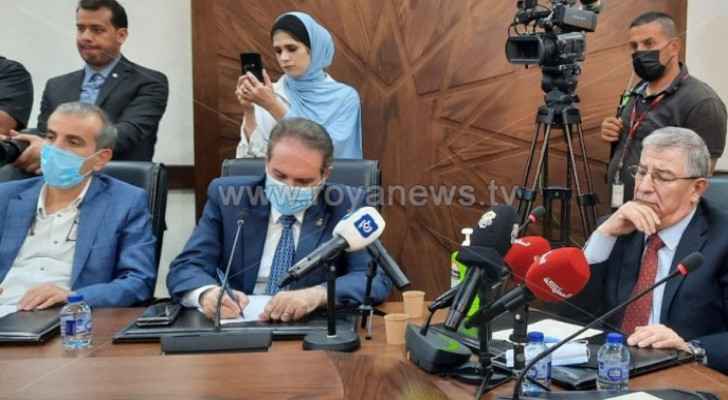 Wednesday, the Minister of Health Feras Hawari said during a meeting held by the Parliamentary Health and Environment Committee in the House of Representatives that the investigation team’s recommendation to refer the death of the five-year-old girl at Al-Bashir Hospital to the Public Prosecuter was approved.

During the meeting, Hawari said "Medical errors occur all over the world, and this loss is unacceptable by any standard.”

He continued "The commission investigating the incident made several recommendations, which were approved and submitted to the Public Prosecution."

He added that the health sector in Jordan needs to strengthen training and education programs in order to be prepared to avoid medical errors in the future.

Hawari said he is confident he can fix the mistakes made within the Ministry, and there is a shortage in the numbers of nurses in the Civil Service Bureau.

In turn, MP Tayseer Krishan said that there are major problems related to medical and technical cadres, stressing that Jordan needs good outcomes in recruitment and not just filling vacancies.

MP Abdul Rahim Al-Maayeh, a member of the Parliamentary Health and Environment Committee, said that medical errors occur, but it is unreasonable for a doctor who recently graduated and was not trained to be placed in the emergency section.

Maayeh continued, “We have a problem in the Ministry of Health, part of which is borne by the Minister of Health.”

MP Farid Haddad said, “We want to rebuild the trust of the Jordanian citizens in the health sector.”

Haddad told the Minister of Health, “If you cannot handle the issues of the ministry, submit your resignation.”

Another MP said during the meeting that the death of the five-year-old girl, Leen, may be more dangerous than the Salt Hospital incident.

MP Imad Adwan told the Minister of Health, "As a matter of moral responsibility, you must submit your resignation."

Additionally, Ghazi Thneibat, another MP, said during the meeting that the Ministry of Health needs to be different from any other ministry, stressing that there should be a huge budget designated for the health sector.

MP Muhammad Al-Alaqma also asked the Minister of Health “For what reason was the child Leen killed? Leen was killed by negligence.”

Alaqma continued, "We suffer from government neglect and a lack of serious partnership with the House of Representatives."

"Our priority should be to support the education and health sectors," Alaqma said.

The investigation team set up by the Ministry of Health Tuesday completed the investigation of the circumstances that led to the death of the five-year-old girl and said Wednesday that the case will be referred to the Public Prosecutor.

Tuesday, the Director of the National Center for Forensic Medicine, Hassan Al-Hawari, said that the cause of the death of the five-year-old child, Leen, who underwent a surgery at Al-Bashir Hospital, was due to bacteremia as a result of inflammation of the peritoneum after an appendectomy.

She had been misdiagnosed twice, leaving her real condition untreated.