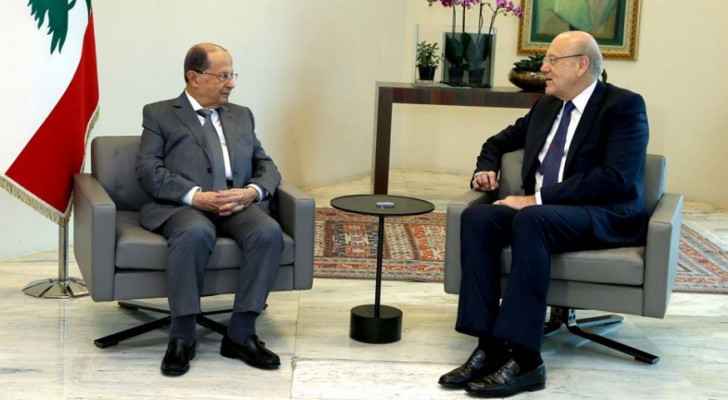 The government, which was formed after 13 months of negotiations, faces difficult challeges ahead amid an unprecedented crisis in the country that has been raging since November 2019.

The session began at 11:00 (8:00 GMT) at the presidential palace in Baabda, in the presence of President Michel Aoun.

Mikati and Aoun, according to the National News Agency, will deliver a speech at the beginning of the session, before the government agrees to form a committee tasked with drafting the ministerial statement, which will be presented later to Parliament during the voting session to give confidence to the new government.

The birth of the government on Friday came 13 months after the resignation of Hassan Diab's government following the horrific explosion of the port of Beirut on August 4, 2020. Two previous attempts to form it failed due to sharp differences between political parties.

Difficult tasks await the Mikati government, which will not be able to provide “magic” solutions to end the daily suffering of the Lebanese as a result of the repercussions of an economic collapse that the World Bank has ranked among the worst in the world since 1850.

It is the responsibility of the new government to quickly reach an agreement with the International Monetary Fund as a first step to get Lebanon out of its crisis, which is characterized by a lack of liquidity and a severe shortage of fuel and electricity, which affects all aspects of life.

The government should also prepare for the parliamentary elections set for May.

The Ministry of Finance announced on Monday that Lebanon has informed the International Monetary Fund that it will receive on the 16th of this month about one billion and 135 million US dollars in special drawing rights, to be deposited in the account of the Banque du Liban.

The International Monetary Fund agreed last month to grant its member countries special drawing rights in proportion to their share, which will allow to increase aid to the most vulnerable countries, with the aim of supporting the global economy that has been exhausted by the outbreak of the Covid-19 epidemic.

The SDR is not a currency and does not have a physical existence. Rather, its value is based on a basket of five major international currencies: the dollar, the euro, the British pound, the renminbi, or the yuan and the yen. Once issued, it can be used as a reserve currency that stabilizes the value of the local currency or converted into stronger currencies to finance investments.

Months ago, the Lebanese authorities began gradually lifting subsidies on major commodities, most notably flour, fuel and medicine. However, this did not alleviate a severe fuel crisis in the country, and residents are still waiting in queues for long hours to fill their cars with gasoline.

In the wake of the fuel crisis, the ability of the Electricité du Liban to provide service has gradually declined over the past months, which led to the increase in rationing hours to exceed 22 hours per day. Private generators are no longer able to provide the diesel needed to cover the hours of power outages.

Doubts over government formation prevail in ....

Doubts over government formation prevail in ....