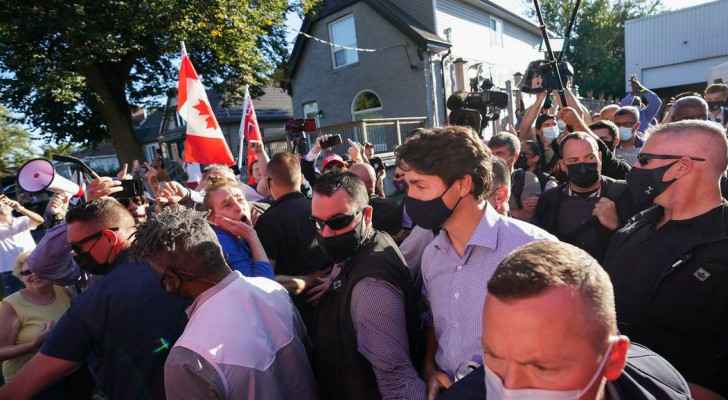 Saturday, the Canadian judiciary indicted a 25-year-old protester for throwing gravel at Canadian PM Justin Trudeau, during an election campaign in Ontario a few days prior to the incident.

Justin Trudeau is so hated by Canadians that people are risking jail time to throw rocks at him.

Pro-tip: Do not throw stones at Prime Ministerspic.twitter.com/xOpH7V3wJz

The court has charged the man with ‘Assault with a Weapon’ and he will be tried on Oct. 6, according to Sky News Arabia.

Trudeau commented on the incident saying, “It is absolutely unacceptable that people be throwing things and endangering others at a political rally.”

Protesters, who Trudeau calls "anti-vaxxer mobs,” were angry with his manner of handling the COVID-19 pandemic, such as proposed mandatory vaccines, reported AFP.

“Yes, there is a small fringe element in this country that is angry, that doesn't believe in science, that is lashing out with racist, misogynistic attacks,” the PM said at a campaign stop.

“But Canadians, the vast majority of Canadians, are not represented by them, and I know will not allow those voices, those special interest groups, those protesters -- I don't even want to call them protesters, those anti-vaxxer mobs -- to dictate how this country gets through this pandemic.” Trudeau said.

Justin Trudeau recently stated that he has ‘no sympathy’ for anyone who might be discriminated against for being unvaccinated.

Justin Trudeau says bringing people together isn't "compatible" with science, and that we shouldn't defend the rights of people "who are anti-vaxx."

Says he has "no sympathy" for those who are discriminated against for being unvaccinated.

Mobs of protesters have been chasing Trudeau wherever he goes and on Friday another protester was arrested for threatening to kill the Prime Minister.

All political opponents of Justin Trudeau condemned the incident.

Trudeau, is seeking a third term in office, and is currently in a statistical draw with his main rival, Conservative leader Erin O'Toole.

US to open land, air borders to vaccinated travelers