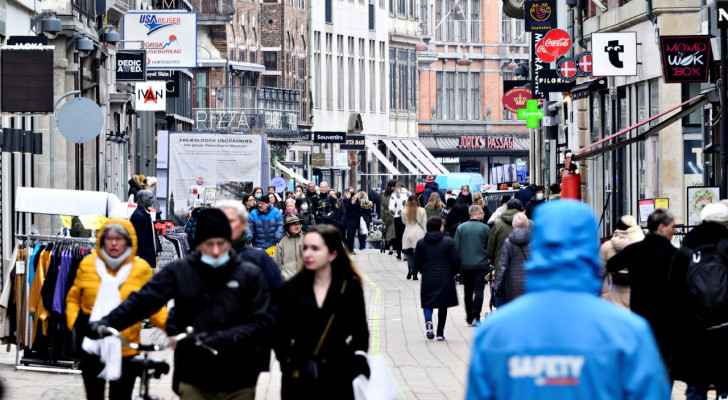 Friday, Denmark completely turns the page on restrictions aimed at combating the outbreak of the Covid-19 epidemic, as the wearing of masks and health permits are no longer required.

People have returned to offices and tens of thousands of people have resumed attending musical performances.

"We are definitely ahead in Denmark because we no longer have any restrictions, we have moved to the other side of the epidemic thanks to vaccination," said Ulrik Orom Petersen, an employee in the advertising department of the Live Nation music organization.

The party organizing company is preparing a music show, which has sold out, which will be attended by 50,000 people, a precedent in Europe, where health restrictions are still imposed. On the 4th of September, Live Nation had previously organized a first festival entitled "Back to Life" that brought together 15,000 people in Copenhagen.

"Being in the crowd, singing like we used to do, makes me almost forget about COVID-19 and everything we've been through in recent months," said Emily Bendix, a 26-year-old who went to the show.

The health permit was imposed in March to be exempt from the closure, but since September 1, it is no longer mandatory, except in nightclubs. This latest measure was also lifted on Friday.

"Our goal is freedom of movement (...) What will happen then is that the virus will also travel and find people who have not yet been vaccinated," Professor Leon Simonsen at Roskilde University (East) told AFP.

Denmark has had no difficulties convincing its population to receive the vaccine. As a result, 73 percent of the population of 5.8 million are fully vaccinated against Covid, and 96 percent of people over the age of 65 are also vaccinated.

Simonsen noted that "if the virus is no longer a threat to society, it happened only thanks to the vaccine."

According to the European branch of the World Health Organization, one of the characteristics of the Scandinavian country is the relationship of trust between the authorities and the people about the strategy.

"Like many countries, throughout the outbreak of the epidemic, Denmark imposed social and health measures to reduce transmission, but at the same time it relied heavily on individuals and societies to willingly follow government instructions," said Catherine Smallwood, in charge of emergencies at the European branch of the organization.

The Danish authorities consider the epidemic to be under control, with the country recording 500 new infections per day and the transmission rate of 0.7.

Health Minister Magnus Heonic confirmed in late August that the government "will not hesitate to act quickly if the epidemic again threatens the basic functions of society."

For the authorities, the return to normal life must be accompanied by strict respect for hygiene measures and the isolation of the infected.

The World Health Organization says that the health situation in the world is still sensitive and requires caution.

Smallwood explained that "every country should remain vigilant in the event of a change in its epidemiological situation."

Denmark intends to closely monitor the number of infected people in hospitals, which is currently barely 130, and to conduct an accurate sequence of examinations to control the spread of the virus. A third booster dose of COVID-19 vaccines will be given to the most vulnerable people from Thursday.

"So far, the immunity provided by the vaccine has protected against the mutant but if other mutated versions emerge as immunity declines, we will have to reconsider our strategy," Simonsen said.

"The situation is still complicated," said Christian Niedergaard, a restaurant owner in the Danish capital.

"The memory of the Corona virus will quickly disappear from some souls, but it will remain in others. As for the restaurant sector, this period of course will change the data. The sector should think of a way to become more resistant," he said.

Entry into Danish territory requires the presentation of a health passport and/or a negative examination result, and the wearing of masks is still mandatory at airports.