Over 100 depart Kabul on first evacuation flight since US withdrawal 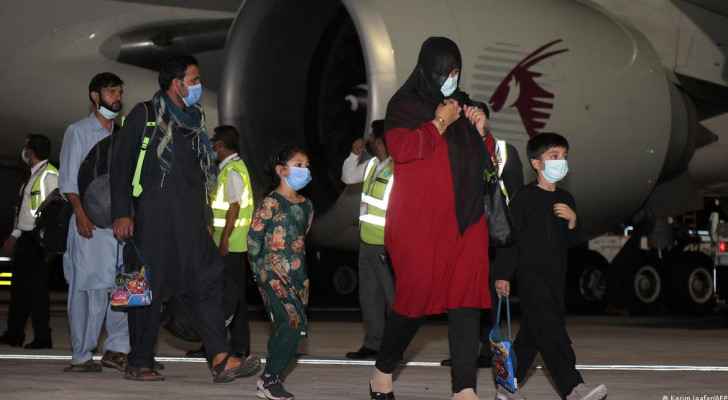 113 people, including US citizens, arrived in Doha from Kabul airport Thursday in the first flight to evacuate foreign nationals from the Afghan capital since US forces completed their withdrawal on Aug. 30.

The trip to Doha came at a time when the Taliban tightened its grip on Afghanistan, less than a month after the movement entered Kabul and ousted former President Ashraf Ghani.

This is the first trip of its kind since the evacuation of more than 120,000 people in chaotic operations that stopped at the completion of the American withdrawal.

The United States praised the Taliban's "cooperation" and "resilience."

The White House announced in a statement that "the Taliban have shown cooperation in allowing US citizens and permanent resident visa holders" to leave for the United States.

The US presidency added, "They showed flexibility and professionalism in the communication that took place with them in this regard," describing the matter as a "positive first step."

AFP correspondents watched the plane landing at Hamad International Airport and the exit of passengers, while a source familiar with the operation told AFP that the Boeing 777 was carrying 113 passengers, including Americans, Canadians, Germans and Ukrainians.

One of the passengers, who holds both Afghan and American citizenship, said before boarding the plane with his family, that the US State Department called him in the morning and asked him to go to the airport.

"We contacted the Ministry of Foreign Affairs, and they called us this morning and asked us to go to the airport," this father told AFP, asking not to be named.

In the days after the Taliban took control of Kabul, the airport became a symbol of scenes of desperation among Afghans fearful of the militant movement's return to power. Thousands of people gathered around its gates daily, and some even clung to planes as they took off.

More than 100 people, including 13 American soldiers, were killed in a suicide attack on August 26 near the airport, for which the local branch of Daesh claimed responsibility.

Live footage broadcast by the Qatari Al Jazeera channel showed groups of travelers, including women, children and the elderly, waiting with their bags at the seats at the gates of the Afghan capital's airport.

Doha, which has become a major transit point for Afghan refugees, said it had worked with Turkey to quickly resume operations at Kabul airport in order to allow the transfer of people and aid.

Qatar has played the role of the main mediator between the Taliban and the international community in the past few years, and many countries, including the United States, moved their embassies from Kabul to Doha in the wake of the Taliban's takeover of Kabul.

"We very much appreciate the Qataris," one of the passengers told the channel, explaining that he is a Canadian.

Away from the airport, a larger Taliban presence was seen on the streets of Kabul Thursday. Armed fighters, including members of the special forces in military uniform, were standing on street corners and supervising roadblocks, according to AFP journalists.

At Kabul airport, the Special Envoy of the Qatari Foreign Minister Mutlaq Al-Qahtani told Al-Jazeera that "today is a historic day for this airport," adding that "the reopening of the airport for international flights (...) may be gradual."

The United States has repeatedly confirmed its pledge to seek the evacuation of American citizens remaining in Afghanistan after the evacuation process ended last month.

Earlier Thursday, White House spokeswoman Jen Psaki announced that only about 100 Americans were still in Afghanistan.

Thursday, the White House praised Qatar's role in this regard.

For its part, the Canadian Ministry of Foreign Affairs announced that the plane had carried 43 of its nationals, and that they would be transferred to Canada in the next few days.

In turn, Dutch Foreign Minister Sigrid Kaag tweeted, thanking the Qatari government for "making this possible" and saying that the plane had carried 13 Dutch nationals.

The Taliban had announced that it would not prevent those wishing to leave from traveling, knowing that it had urged skilled Afghans such as doctors and engineers to stay.

The Taliban promised a more moderate rule than their previous repressive rule between 1996 and 2001. However, it showed clear indications that it will not tolerate the opposition.

Earlier this week, Taliban armed elements dispersed hundreds of protesters in cities across Afghanistan, including Kabul and Faizabad in the northeast, and in Herat in the west, where two people were killed in a shooting.

Late Wednesday, the Taliban quelled any further civil unrest, declaring that demonstrations needed prior permission from the Ministry of Justice, adding that "for the time being" no demonstration was permitted.

On Thursday, the UN Special Envoy to Afghanistan Deborah Lyons expressed concern about the collapse of the Afghan economy, and urged the international community to continue providing economic aid to Afghanistan despite concerns about the Taliban government.

Lyons warned during a UN Security Council session that cutting economic aid to Afghanistan would lead to "an economic recession that could plunge millions of people into poverty and hunger, and could lead to a massive refugee wave (...) and set Afghanistan back several generations."

An interim government formed by the Taliban from loyalists only to the movement officially began operating this week, with the appointment of known militants in all major centers and without the participation of women in them, despite previous promises of an all-Afghan administration.

All the important portfolios were assigned to prominent leaders of the movement, especially from the Haqqani network, the most fierce Taliban faction, which is known for launching devastating attacks.

Even as the Taliban consolidates its influence, it faces a huge task by assuming the reins of government in Afghanistan, which suffers from economic difficulties and security challenges, including those posed by the local branch of Daesh.

Qatar Airways wins “Airline of the Year” award for seventh ....

Qatar Airways wins “Airline of the ....