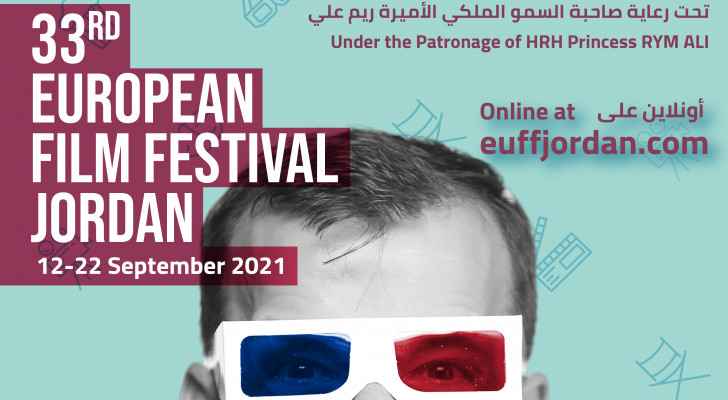 Under the Patronage of Her Royal Highness Princess Rym Ali, the European Film Festival (EUFF), which is funded by the European Union (EU) Delegation in Jordan and organised by EUNIC Jordan, returns for its 33rd edition in a virtual format between September 12 – 22, in partnership with the Royal Film Commission and Greater Amman Municipality.

The free of charge festival will be held virtually on www.euffjordan.com to allow more people to enjoy the 21 featured European Award-winning productions and critically acclaimed participating films, safely from the comfort of their homes, joined by friends and families. All screened films will be subtitled in both English and Arabic to bring the Jordanian and European communities together, opening up a space for intercultural cooperation, exchange, dialogue and enhancement of their shared values.

The festival will feature the first ever Novel Adaptation workshop to be held in the Middle East in partnership with the RFC, which targets professional film script writers, and aims to equip them with creative strategies and skills that will enable them to create screenplays based on novels. This workshop aims to revolutionise the filmmaking industry in Jordan and the Middle East.

As part of the festival, the programme will also feature several workshops, masterclasses and Q&A’s that are hosted by the participating films’ actors and producers, in both virtual and physical forms to transfer their knowledge and experience in filmmaking to aspiring filmmakers in Jordan.

“We are very excited to celebrate the 33rd edition of the European Film Festival, which is an excellent platform to European culture, history and traditions. We have also been able to build on last year’s experience by bringing the festival virtually to film enthusiasts and making it accessible all over the country. We are looking forward to another exceptional year, with a wide variety of films, and hopefully in the future we will be able to embrace a hybrid form of celebrating European film and culture, and reaching larger numbers of film enthusiasts all over Jordan,” said EU Ambassador to Jordan Maria Hadjitheodosiou. “The Festival is a thrilling opportunity to discover Europe's people, landscapes and traditions, and to marvel at productions that never reach commercial cinemas!”

EUFF’s closing ceremony will see the announcement and screening of the winners of its two film competitions; the Short Film Competition and the Mobile Film Competition, which aim to support creativity and filmmaking in Jordan, where the former is geared towards professional film creators, while the latter targets amateurs.