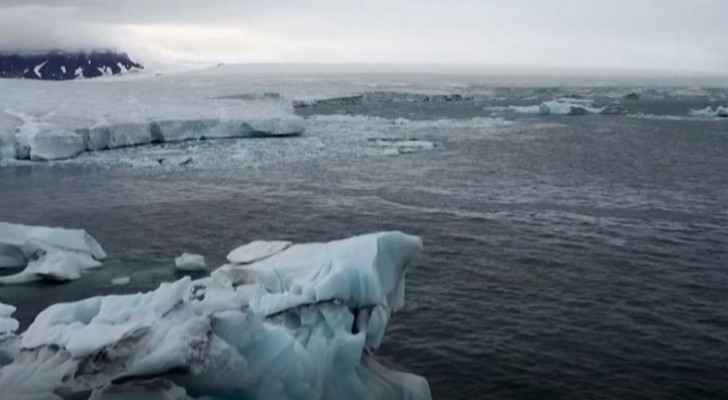 The Russian 'Icebreaker' ship  takes 3.5 days to travel 2,400 kilometers to the North Pole from Murmansk, the base of the Russian Northern Fleet.

The trip is only possible in summer, when the ice cover is at its thinnest, and climate change is gradually making the trip easier year after year, according to the relevant Russian authorities.

A report released in March said the Arctic's ice cover is now "five to seven times" thinner than it was in the 1980s, adding that in the summer months the waters are increasingly ice-free.

Because of the unusually hot summer, the accelerating melt has affected a large glacier in Greenland, although this year the process is generally within the "average rate."

Greenland is witnessing a significant melting of the ice sheets due to the unusual warmth in the region.

Since July 28, about 8 billion tons of ice has been melting every day — more than double the usual amount in the summer, according to the Polar Portal, a glacier and arctic climate monitoring site.

According to the Danish Meteorological Service (DMI), the air temperature in northern Greenland is now over 20 degrees, more than double the average for this time of year. On July 29, the highest temperature since the start of monitoring was recorded at Nerlerit Inat Airport in eastern Greenland, at 23.4 degrees Celsius.

In August, a large percentage of rain was recorded on the snow caps as a whole, as over three days seven billion tons of rain fell. It is the largest amount of rainfall since records of climate variables began in Greenland in 1950, and it is also the first time that rain, not snow, has fallen on the highest mountain peak in Greenland.

With an area of 1.8 million square kilometers, Greenland's glacier is the second largest in the world after Antarctica. Due to the warming of the Arctic climate, its melting has accelerated significantly since 2000.