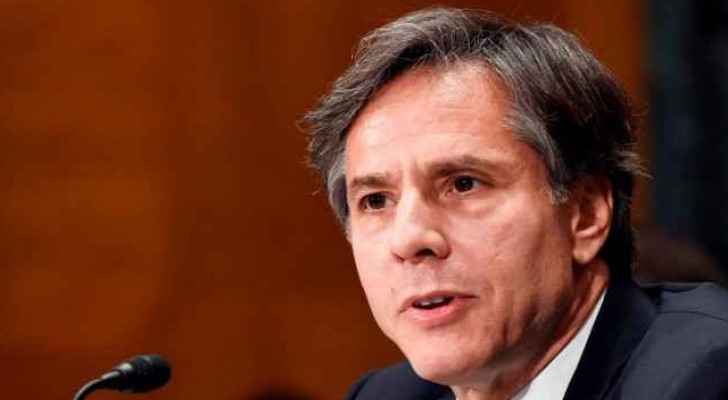 US Secretary of State Anthony Blinken confirmed Tuesday that the Taliban have pledged again to allow Afghans to leave freely.

US President Joe Biden is facing mounting pressure due to reports that hundreds of stranded people, including Americans, have been prevented from traveling outside an airport in northern Afghanistan.

Blinken said at a press conference in the Qatari capital, Doha, that the Taliban informed the United States that they would allow people with travel documents to leave freely, noting that his country would work to ensure that the movement fulfilled its pledge.

"The entire international community looks to the Taliban to honor this pledge," Blinken said.

Blinken, who is accompanied on his visit to Doha by Defense Secretary Lloyd Austin, is the highest-ranking US official to visit the region since the Taliban's sudden seizure of power in Afghanistan on Aug. 15 and the completion of the US withdrawal from the country.

During his meeting with the Emir of Qatar, Sheikh Tamim bin Hamad Al Thani, Blinken thanked his host for the “exceptional support provided by Qatar in facilitating the safe passage of citizens of the United States, our partners, and other vulnerable Afghans” during the hastily organized evacuations from Kabul Airport that were chaotic overwhelming.

The US military established a huge air bridge in Kabul in mid-August, which allowed the evacuation of about 123,000 people until the date of its withdrawal from Afghanistan, and Washington said that 75 to 80 percent of these were "Afghans who were at risk."

In all, more than 55,000 of the evacuees passed through Doha, the main base for the evacuation.

The wealthy Gulf emirate, thanks to its proximity to the Taliban, plays a major role in the current priority of Washington and a number of Western countries, which is the expulsion of citizens of these countries who are still trapped in Afghanistan, along with many Afghans who want to escape.

A senior US official had announced on Monday, before Blinken's arrival in Doha, that four Americans had left Afghanistan by land as part of the departure operations arranged by the United States for the first time since its withdrawal.

He added that the Taliban was aware of this and "did not prevent" them from leaving, without mentioning which border country these Americans entered.

US officials say other Americans may have left since the United States completed its withdrawal from Afghanistan at the end of August, but through their own means.

They point out that more than 100 Americans, most of them dual nationals, are still in Afghanistan after the air bridge that allowed the evacuation of tens of thousands of people in August.

Quickly, opponents of US President Joe Biden accused him of abandoning Americans.

It is believed that tens of thousands of translators and other people who supported the US mission and their families are still in Afghanistan, and many of them fear reprisals despite assurances from the Taliban.

But NGOs say some 600 to 1,300 people - including girls and US citizens - are stranded at Mazar-i-Sharif airport in northern Afghanistan.

Marina Legery, founder and executive director of a small US NGO working in Afghanistan, told AFP that the Taliban did not allow anyone to cross.

Blinken confirmed that the Taliban did not prevent people with valid travel documents, but not all passengers on flights had the necessary papers, and denied the existence of a "hostage-like situation" in Mazar-i-Sharif.

The US minister explained that there are certainly obstacles to departing planes, as the United States does not have employees there on the ground.

"We don't have the means to verify the accuracy of the data, the identification of passengers on these planes, the aviation security protocols or where they plan to land, among other things. These are real concerns," he added. "We are working as we speak to resolve these issues."

US officials assert that the United States no longer controls the airspace in Afghanistan and that the Kabul airport is in a bad state.

Qatar has sent technical teams to Kabul to discuss its restart "as soon as possible," after flights was halted, to allow for the continuation of evacuations and the arrival of humanitarian aid.

US Defense Secretary Lloyd Austin admitted that the withdrawal caused obstacles, but stressed that Washington was committed to stopping threats from Afghanistan.

"There is no doubt that (withdrawal) will make it more difficult to identify and deal with threats emanating from the region," he added.

Tuesday, Blinken toured Al Udeid Air Base outside Doha, through which more than half of Afghanistan's evacuees have been flown.

"I am grateful for what you have done, your country is proud of you, and the president of the United States is proud of you," the US minister told soldiers and civilians at the base.

Vehicle strikes Christmas parade in US, killing five and ....

Vehicle strikes Christmas parade in US, ....