'Our goal is to get the Jordanian economy back on track': Shraideh

'Our goal is to get the Jordanian economy back on track': Shraideh 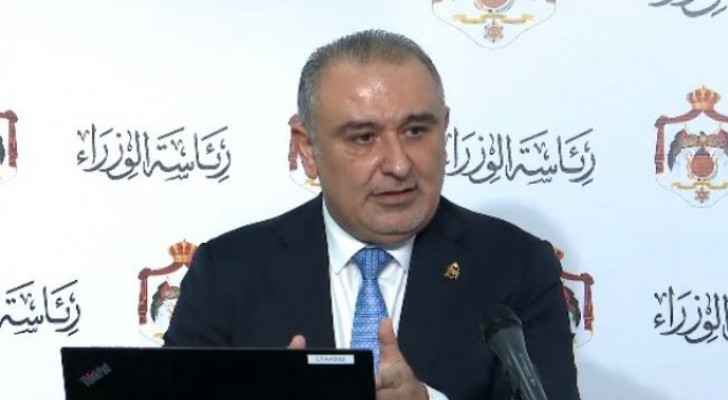 Sunday, the Minister of State for Media Affairs, Sakher Dudin, and the Minister of Planning and International Cooperation, Nasser Shraideh, held a press conference at the Prime Ministry to talk about the government’s economic priorities program for the years 2021-2023.

Earlier Sunday, the government submitted the details of the program to His Majesty King Abdullah II, which aims to recover the national economy from the repercussions of the COVID-19 pandemic.

Dudin said the government's economic priorities program includes rapid reform measures in light of the repercussions of the coronavirus crisis, and that the program was developed in consultation with MPs and the private sector, adding that the program focused on industry, tourism, technology and agriculture sectors.

Additionally, he spoke about the reopening of sectors, stressing that all sectors will return to operate normally in September.

As for the COVID-19 situation in the Kingdom, Dudin said that the situation is stable, stressing the need to receive the coronavirus vaccine in order to limit the spread of the virus.

However, he said the pandemic 'is not over,' and that people need to continue adhering to the required health and safety measures.

In turn, the Minister of Planning and International Cooperation, Nasser Shraideh, said that the goal of the government’s economic priorities program 2021-2023 is to help the national economy to recover.

“Our goal is to get the Jordanian economy back on track.”

He added that these priorities were distributed to three main topics, including improving the investment environment, enhancing private sector competition to contribute to providing job opportunities, and supporting priority sectors.

He explained that the program’s total expenditure will reach JD 480 million.

Shraideh added that the public-private partnership projects within the program amount to approximately JD 3.8 billion.

He said unemployment and the slowdown in economic activity are the most important challenges that the government faces.

Shraideh noted that the government's plan aims to create new job opportunities. However, he pointed out that the public sector cannot meet the needs of newcomers to the labor market.

He revealed that the government is working to amend the insurance law in order to reduce the subscription rates for newcomers to the labor market for a period of up to 10 years.

He stressed that the government will review the economic plan every six months to follow up the progress of work.

Measures taken by the government to stimulate the investment environment include reducing electricity costs on specific sectors, restructuring customs tariffs and reducing costs for licensed microfinance companies, he said.

He also said the government will take serious actions in the field of digital transformation in order to stimulate investment, and that the government will work on major projects with the private sector by launching five infrastructure projects at a cost of JD 260 million during the current year.

Shraideh continued that there are preparations for the launch of the first phase of the national railway network project, the regional electrical interconnection project, the development of the Hamza oil and Risha gas fields, and the improvement of the quality of public transport services.

He revealed the extension of the sustainability program for a period of six months during 2022, in addition to a national program which aims to stimulate the private sector to operate, with a total value of JD 180 million for both programs.

He indicated that the capital allocations to the tourism sector were increased by JD 50 million to enable this sector to recover.