Pedaling for peace: cyclists hit the road in war-torn Yemen

Pedaling for peace: cyclists hit the road in war-torn Yemen 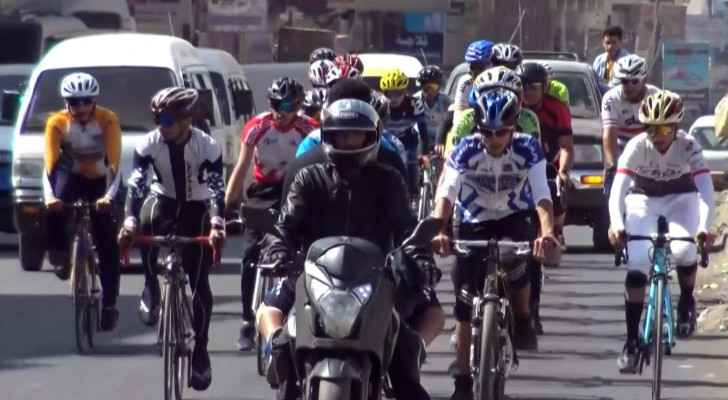 Dozens of Yemeni cyclists hit the road Wednesday with a shared goal -- to spread peace in a country embroiled in conflict for more than seven years.

In the capital Sanaa, the cyclists prepared for their 320-kilometre (200-mile) journey to the northern province of Saada, one of the areas devastated by the ongoing war between the government and the Huthi rebels.

Mohammed al-Jidadi checked his pedals before he set off with approximately 40 others on the busy streets of Sanaa.

Another cyclist nearby pumped air into his tyres, while a third young man in full cycling gear playfully carried his bike pretending to play the guitar.

They plan to ride north through Amran province to reach Saada.

"We are going to Saada to spread the message of peace," Jidadi told AFP.

Yemen, the poorest country in the Arabian Peninsula, is devastated by conflict, coronavirus and a humanitarian crisis that the United Nations has called the world's worst.

Millions of people have been displaced by the grinding war, and more than 80 percent of Yemen's 30 million people depend on aid.

But despite everything, the cyclists said they hoped their ride would have a positive impact.

"We don't want cycling limited to one province, and we want to relay the message to all provinces that cycling is meant to reach all nations," cyclist Mohammed al-Harazi told AFP.

The message of peace is more important than ever, the cyclists said.

Tens of thousands of people, mostly civilians, have been killed in Yemen since 2015, when a Saudi-led coalition intervened to support the internationally recognised government after Iran-allied Huthi rebels took control of Sanaa the year before.

A UN-brokered agreement reached in 2018 between the warring sides offered some hope, but a peaceful settlement has yet to materialise.

Yemeni journalist killed on way to hospital to give birth

Yemeni journalist killed on way to hospital to ....

Yemeni journalist killed on way to hospital to ....

Yemeni journalist killed on way to ....