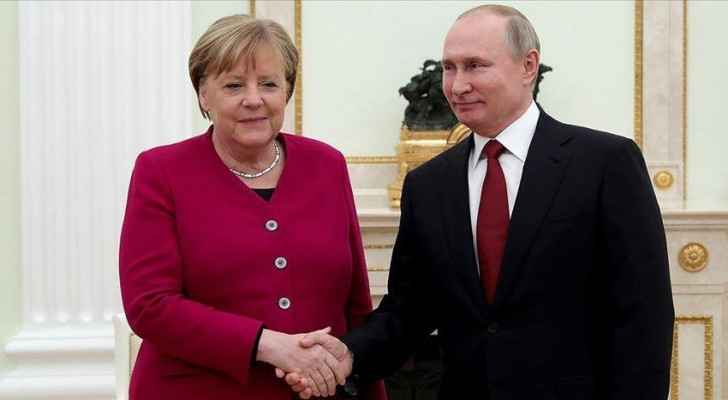 In her last meeting with President Vladimir Putin before leaving her post, German Chancellor Angela Merkel called Friday in Moscow to continue dialogue with Russia despite their "deep differences."

This visit comes exactly a year after the poisoning of Russian dissident Alex Navalny.

Navalny is currently serving a prison sentence in Russia.

Ahead of the meeting, Merkel laid a wreath at the tomb of the Soviet Unknown Soldier killed during World War II.

When receiving her in the Kremlin, Putin presented her with a bouquet of roses.

"Even if we have deep differences, we talk to each other and it should continue like this," said Merkel, who will step down in the fall after 16 years in power and a complicated relationship with Putin.

She added that there was "a lot to discuss," referring in particular to the situation in Afghanistan and bilateral relations.

In a later press conferece, she called on Putin to release Navalny.

In turn, Putin said Navalny is imprisoned for a 'crime' and not political reasons.

Putin stressed that this meeting was "not just a farewell visit", but a "serious meeting" between two veteran figures on the European political scene.

Merkel, who is fluent in Russian and grew up in the former German Democratic Republic, and the Russian president, who speaks German because he served in the KGB in East Germany, frequently praises their true working relationship.

In addition to the situation in Afghanistan and the case of Alexei Navalny, the main opponent of the Kremlin whose organization has been dissolved, Putin and Merkel will discuss differences related to espionage, repression in Belarus and the war in Ukraine.

On a "memorial" day associated with Navalny, the German chancellor's visit is symbolic. After a two-day coma in a Siberian hospital, the anti-corruption activist was transferred to Berlin on August 22, 2020. German doctors diagnosed him with poisoning with Soviet-made Novichok, and treated him.

After his recovery, he accused the Kremlin and its security services. Since then, the West, led by Berlin, has demanded clarifications from Moscow, which denies its involvement.

Christo Grosev, one of the writers of the investigative website Bellingcat, who confirms that he has known the group belonging to the intelligence service responsible for the poisoning, wrote on Twitter that the date of Merkel's visit may be a sign of "calm down" towards Moscow or "a sincere attempt to pressure Putin."

In preparation for Merkel's visit, the Russian Foreign Ministry issued an indignant statement on Wednesday accusing Berlin and its allies of using the Navalty case to "attack" Moscow and interfere in the legislative elections scheduled for next September.

For his part, the dissident wrote from his imprisonment an article published on Friday by many European newspapers calling on world leaders to fight corruption and accusing the Russian president of embezzlement.

In a message on social networks, he also thanked all those who saved his life and stressed that he would continue his fight. "I have a second chance to live and make all the decisions that I think are right and fair," he said.

The other thorny issue in the meeting is Ukraine. Merkel is trying with France to negotiate with Moscow to find a solution to the conflict between Kiev and pro-Russian separatists in the east of the country that erupted in 2014 following Russia's annexation of Crimea.

But the process reached a dead end.

The German chancellor is supposed to visit Kiev on Sunday.