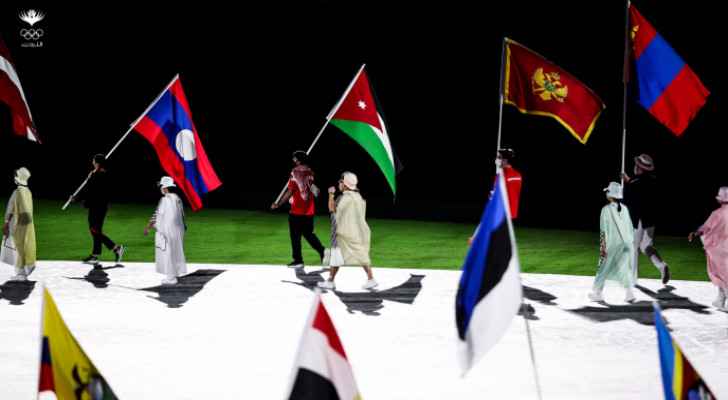 Sunday, the national karate athlete, who won the bronze medal in the under-67 kg competitions at the 2020 Tokyo Olympics, Abdul Rahman Al-Masatfa, carried the Jordanian flag during the closing ceremony of the Olympics.

The Jordanian delegation who participated in the Olympics will return to the Kingdom Tuesday, Aug. 10.

Notably, Jordan won two medals in the Tokyo Olympics, including a silver medal by the taekwondo athlete Saleh Al-Sharbati and a bronze medal by the karate athlete Abdul Rahman Al-Masatfa.

The Tokyo 2020 Games were declared closed on Sunday by IOC chief Thomas Bach, who said it had been the "most challenging Olympic journey" after a year's pandemic delay and threats of cancellation.

Bach called the Tokyo Games "unprecedented" as he addressed the 68,000-seat Olympic Stadium, which was empty of spectators as Japan battles a record coronavirus outbreak.

"In these difficult times we are all living through, you give the world the most precious of gifts: hope," the International Olympic Committee president told athletes at the ceremony.

"And now I have to mark the end of this most challenging Olympic journey to Tokyo: I declare the Games of the 32nd Olympiad closed," Bach said.

It marked a low-key end to an extraordinary Olympics that have mostly played out in empty venues with only athletes, team officials and media present.

Athletes have lived in strict biosecure conditions with social distancing at the Olympic Village and instructions to wear masks unless eating, sleeping, training or competing.

As the Olympic flag was passed to Paris mayor Anne Hidalgo for the 2024 Games, live footage showed cheering crowds in the French capital -- in stark contrast to Tokyo.

Bach has described how the IOC considered cancelling the Olympics and claiming the costs on its insurance policy but said officials ploughed ahead with holding the Games "for the athletes".

Meet the athletes representing Palestine in the 2020 Tokyo ....