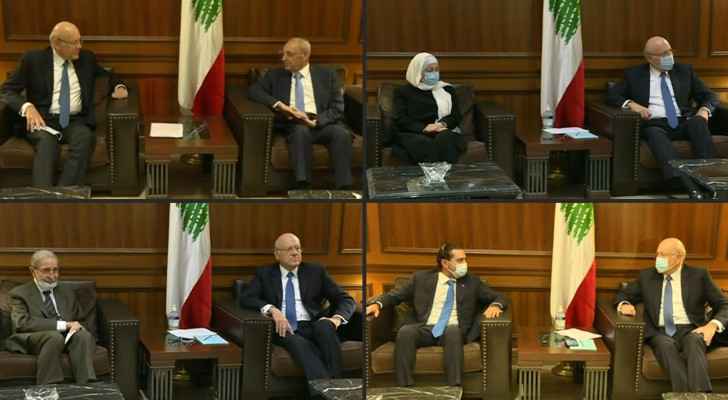 Lebanon's new prime minister-designate Najib Mikati was due to start consultations with leading political parties Tuesday with a view to forming a long-awaited government.

The billionaire politician, already twice a prime minister, was designated on Monday, days after Saad Hariri threw in the towel.

The government of Hassan Diab resigned following a deadly port explosion in Beirut last August and efforts to agree on a new lineup have proved fruitless.

The institutional vacuum is holding up a potential financial rescue plan for Lebanon, which defaulted on its debt last year and has since sunk into what the World Bank has described as one of the world's worst crises since the mid-19th century.

The designation of the 65-year-old Mikati, Lebanon's richest man and to many a symbol of its corrupt oligarchy, was met with general scepticism.

A native of Tripoli, Lebanon's second city and one of its poorest, he was accused by a state prosecutor in 2019 of illicit enrichment, a charge he denies.

"How can I trust a thief who stole from me and my children and their future?" asked 57-year-old Beirut resident Mohammed Deeb, after Mikati's designation.

"As long as this (political) class is still in power, nothing will change."
On Monday evening, dozens of protesters gathered outside Mikati's Beirut home, accusing him of corruption and cronyism.

But Lebanon's bickering politicians view Mikati as a consensus candidate, who may be capable of easing a political deadlock that has stymied efforts towards forming a government.

Mikati, the third politician in a year to attempt the job, promised his government would work on implementing a French roadmap conditioning a huge aid package on reform and transparency.

Tuesday's meetings with the parliamentary blocs are the customary official step that follows a new prime minister's designation but the high-stakes horse-trading has yet to begin.

If he succeeds where Hariri failed for 10 months and forms a government, Mikati will be expected to steer the country to parliamentary polls due next year.

In an interview with the An-Nahar newspaper, Mikati vowed his lineup would be "purely technical" and tasked with bridging the gap to the elections.

In some of his first comments after his designation, Mikati addressed the shortages that have plunged the country into darkness and further crippled its crumbling economy.

Lebanon can no longer provide mains electricity to its citizens for more than a handful of hours a day nor can it afford to buy the fuel needed to power generators.

Almost none of the international community's demands for a broad programme of reforms have so far been met.

Further stalling the bankrupt state's recapitalisation has been the government's failure to engage the International Monetary Fund and discuss a fully-fledged rescue plan.

Until then, the monetary institution is due to send around $900 million as part of its Special Drawing Rights (SDR) aid financing scheme to help Lebanon recover.

Experts have warned however that the amount would not be enough and risked being misused by a ruling class that offers no more guarantees of transparency than before.

According to the Al-Akhbar newspaper, Mikati wants to use the IMF money to build new plants aimed at stabilising Lebanon's power supply.

'We are proud of the inclusion of Salt on the UNESCO World ....

'We are proud of the inclusion of Salt on the ....

'We are proud of the inclusion of Salt on the ....