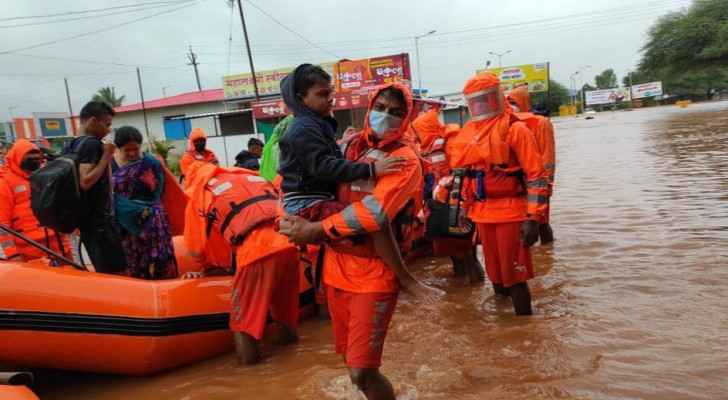 The death toll from the monsoon rains in India has risen to 76, officials said Saturday, as torrential rains swept the western state of Maharashtra, causing landslides and the collapse of a building.

The state government said in a press statement that "heavy rains that fell on different parts of the state, sometimes accompanied by high tides and flooding of dams, led in different areas to torrential rains and floods in several areas."

The rain that has been falling since Thursday caused a building collapse in Bombay, landslides and buried dozens of homes, while 59 people are still missing, according to the government.

Units of the navy and the air force are participating in the rescue efforts after the rains caused floods that isolated thousands of citizens, but rescue operations are hampered by landslides that cut off roads, including the main highway linking Bombay to Goa.

The water level reached 3.5 meters in areas of Chiplun city, 250 km from Mumbai, after 24 hours of non-stop rain, causing the Vashishti River to overflow, inundating roads and homes.

Maharashtra's chief minister said emergency teams were having difficulty accessing isolated neighborhoods in Chiplun due to damage to roads and bridges there.

The Indian Navy deployed seven rescue teams equipped with rubber boats, life jackets and buoys in the affected areas, in addition to a helicopter to airlift the trapped residents. Each team is accompanied by specialized divers from the Navy.

The Indian Meteorological Department has issued warnings to several areas in the state, indicating that heavy rains will continue over the coming days.

Floods and landslides are common during India's rainy season, which runs from June to September, and also cause buildings and walls to collapse that do not comply with building standards.

And last weekend, at least 34 people were killed after several homes were crushed by a wall collapse and landslide in Mumbai.