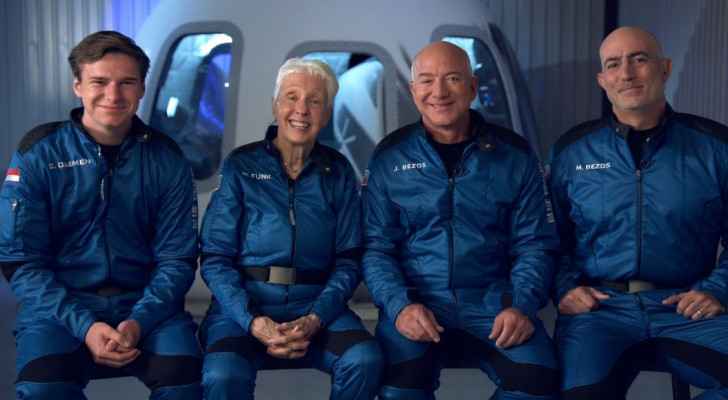 Jeff Bezos, the world's richest man, will join the club of astronauts Tuesday on his company's first manned flight, Blue Origin, which will mark a new milestone in the fledgling space tourism.

The mission comes nine days after Virgin Galactic founder Richard Branson breached the limits of Earth's atmosphere, a step ahead of the former Amazon CEO in what appears to be a showdown between the rich in space.

However, Bezos, 57, insisted that "this is not a competition."

"The first person to reach space was Yuri Gagarin, and that happened a long time ago," he told NBC on Monday, referring to the Soviet cosmonaut who made the first manned flight into space in 1961.

"It's about building a path into space for future generations to do amazing things there," he added.

Bezos created Blue Origin in 2000, with the ambition that one day it could build floating space colonies equipped with artificial gravity, where millions of people could work and live.

The company's general manager, Bob Smith, said during a press conference Sunday that the "New Shepard" missile that will be launched is "only the beginning."

He explained that when Neil Armstrong and Buzz Aldrin set foot on the moon on July 20, 1969, "it inspired me and an entire generation in the world," adding, "We work hard every day to preserve well this legacy."

The company is currently developing a high-thrust orbital rocket called the New Glenn, as well as a lunar lander, in hopes of securing a contract with the US space agency and its Artemis program, enabling it to become a major private partner for NASA.

The New Shepherd will take off at 08:00 (13:00 GMT) Tuesday from an isolated location in the western desert of Texas. The event will be broadcast live on Blue Origin.com, an hour and a half before its launch.

Bezos will be accompanied on the flight by his brother Mark, 82-year-old astronaut Wally Funk, as well as 18-year-old Dutchman Olivier Daemen.

Damon will replace someone who won a ticket at auction for $28 million as Blue Origin's first customer, but was unable to attend.

The capsule will then detach from its carrier, and astronauts can untie their belts to experience zero gravity.

The crew will spend a few minutes at an altitude of 106 kilometers, or six kilometers beyond the Karman Line, the internationally recognized boundary between Earth's atmosphere and space.

They will then be able to contemplate the view of the dark blue and black planet camping out over the rest of the universe from the large windows that represent a third of the cabin space.

Wally Funk, who was a member of the Mercury 13 Astronaut Training Project, had to give up her dream because of the sexism of the 1960s. But she hopes to make the most of this adventure.

"I will feel everything," she told NBC, longing to swim and spin in zero gravity.

The craft will automatically return to the landing area north of the launch site, while the capsule will begin a free fall before deploying three giant parachutes and gently descending into the Texas desert after an 11-minute flight.

The company plans to launch two more flights this year and "much more" starting next year.

"We have received 7,500 bids from more than 150 countries, and there is clearly a lot of interest," Smith said during the press conference, adding that the first flights "are leaving at a very good price."

Billionaire Elon Musk's SpaceX will join the space race in September with an all-civilian orbital expedition aboard the Crew Dragon. SpaceX has also teamed up with Axiom to transport visitors to the International Space Station.