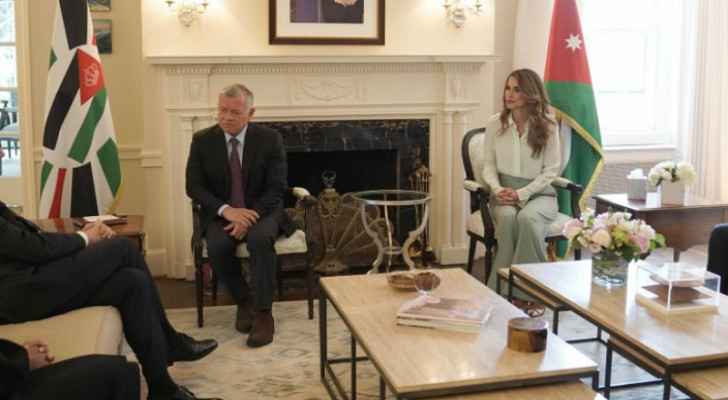 The meeting, which took place on the sidelines of the official royal visit to the US capital, in the presence of Her Majesty Queen Rania Al Abdullah and HRH Prince Al Hussein bin Abdullah II, the Crown Prince, discussed international efforts to provide COVID-19 vaccines.

His Majesty stressed the need to ensure the fair and effective distribution of vaccines to all countries to enhance international efforts exerted in tackling the pandemic.

His Majesty referred to Jordan's efforts to provide vaccines to citizens, residents and refugees.

Jordan was one of, if not the first country, to provide a free, systemic distribution of vaccines to refugees.

His Majesty also praised Pfizer's cooperation with Jordan in providing vaccines to refugees, pointing to the Kingdom's plan to increase the number of vaccine recipients in order to reduce the repercussions of the pandemic and move forward with the plan to open schools and universities in September.

The meeting was attended by the Deputy Prime Minister and Minister of Foreign Affairs and Expatriates, Director of His Majesty's Office, and the Kingdom's Ambassador to Washington.