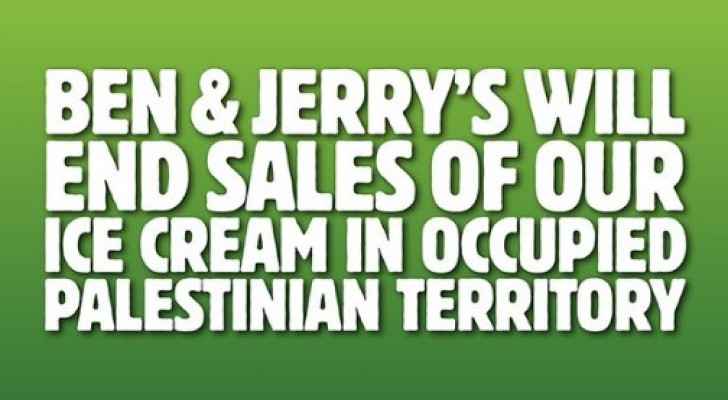 Famous ice cream maker Ben and Jerry's announced Monday that it will stop selling in the occupied Palestinian territories after calls by advocates that selling ice cream in illegal Israeli Occupation settlements was inconsistent with the company's normally progressive values.

In a statement published on Twitter, the company wrote, "We believe it is inconsistent with our values for Ben & Jerry’s ice cream to be sold in the Occupied Palestinian Territory (OPT). We also hear and recognize the concerns shared with us by our fans and trusted partners."

The statement added that Ben and Jerry's has "a longstanding partnership with our licensee, who manufactures Ben & Jerry’s ice cream in Israel and distributes it in the region. We have been working to change this, and so we have informed our licensee that we will not renew the license agreement when it expires at the end of next year."

The statement concluded that the company will remain in the Israeli Occupation, though it did not disclose particulars about the new arrangement.

Ben and Jerry's has long been known to support a plethora of social causes, including the Black Lives Matter movement, climate change, and others.

According to Middle East Eye, the pro-Palestine Adalah Justice Project embraced the decision, but further called for the "complete disengagement from all business dealings with apartheid Israel."

Ben & Jerry’s will end sales of our ice cream in the Occupied Palestinian Territory. Read our full statement: https://t.co/2mGWYGN4GA pic.twitter.com/kFeu7aXOf3