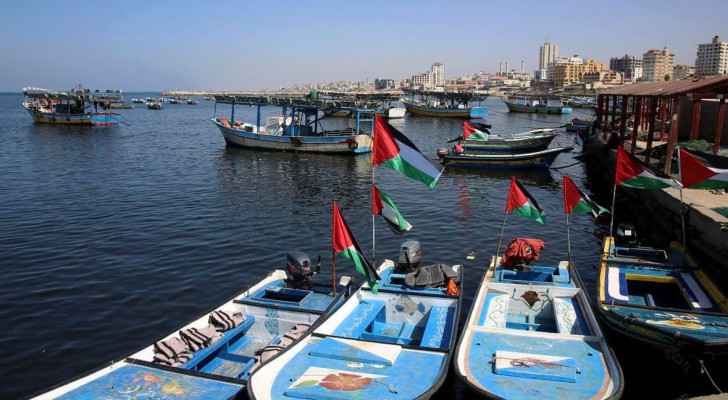 Monday, the Israeli Occupation announced the expanding the fishing area off the shores of the Gaza Strip, allowing the import and export of some materials and products.

"It was decided to expand the fishing area in the Gaza Strip from nine to twelve nautical miles, starting today (Monday) in the morning," the Coordination Unit for Government Activities in the Palestinian Territories (COGAT) said in a statement.

According to the statement, this decision came "in the wake of the prevailing security calm in the recent period and after an assessment of the general security situation."

The unit added that the Israeli Occupation allowed "the import of medical, hunting and important materials for industry and textiles from Israel into the Gaza Strip through the Kerem Shalom crossing," or Kerem Shalom.

The Jewish state will also allow "the export of agricultural products and textiles from the Gaza Strip into Israeli territory," the statement confirmed.

The Israeli Occupation imposes a land, sea and air blockade on the Palestinian enclave, which has a population of two million and has been controlled by the Islamic Resistance Movement (Hamas) for more than a decade.

The opening of the sea to the fishermen of the Gaza Strip or its closure remains subject to the level of tension between the two sides.

The statement stressed that the continuation of this procedure "is conditional on maintaining security stability."

Last week, the Israeli Occupation launched raids on military targets in Gaza in response to the launching of incendiary balloons from the Strip, which caused fires.

May 21, the Israeli Occupation and Hamas, which controls Gaza, announced a ceasefire that ended a bloody escalation between the two sides that lasted 11 days and resulted in 260 deaths on the Palestinian side, including 66 children.