How much has Jeff Bezos earned since stepping down from his position as CEO of Amazon?

How much has Jeff Bezos earned since stepping down from his position as CEO of Amazon? 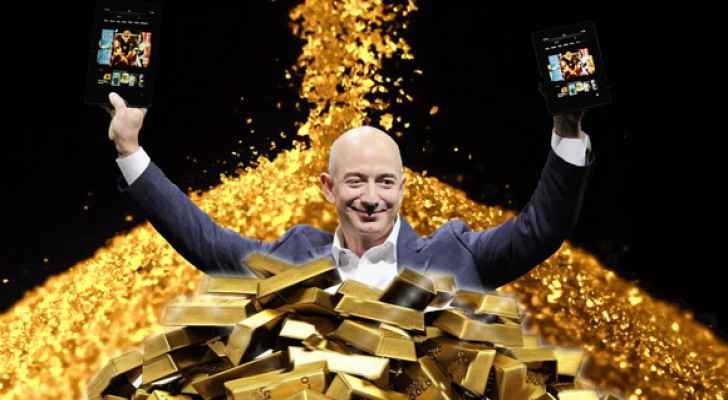 Days after Jeff Bezos stepped down from his position as CEO of Amazon, his fortune increased by a whopping 12,430 percent.

After 27 years, Bezos succeeded in increasing the market value of the company to $1.8 trillion.

His fortune increased by more than $200 billion since 1998, when he first appeared on the Forbes 400 list of the richest Americans with a net worth of $1.6 billion.

Now, Bezos is the world's richest person with a fortune of more than $210 billion, 8.8 billion more than his last days at Amazon as CEO.

Bezos will remain as Amazon's chairman, while Amazon Web Services chief Andy Gacy, who joined the e-commerce company in 1997, took over as CEO July 5.

Bezos will shift his focus slightly from the company he founded in 1994, and will increase his interest and efforts in his two charities, the Bezos Day One Fund and the Bezos Earth Fund, as well as his space tourism company, Blue Origin, which is set to take him and his brother Mark into space July 20.

Bezos first became a billionaire in 1998, the year after Amazon went public as an online bookseller. At that time, the company was just beginning to expand its business to selling CDs online. That year, Amazon's average share price was just $7.47, which is a fraction of what the stock is currently worth, $3,487.40.

Over the next two decades, Amazon's business began to expand into other industries. In 2005, the company launched its now popular Prime membership service, which was offering customers special services for an annual fee of $79 (Amazon Prime now costs $119 per year).

In 2006, Amazon created the Amazon Web Services cloud computing unit, which is now the company's most profitable arm.

The company entered into the streaming platforms business in 2011, the groceries business in 2017 with its acquisition of the supermarket chain Whole Foods, the home security business in 2018, with its purchase of Ring, and the film production business, aiming to expand with its latest MGM studio show in May.

Amazon's sheer size and growing influence has drawn criticism from across the political spectrum. Antitrust regulators are investigating the company, and labor activists are seeking to unite Amazon's sprawling network of warehouses.

Lawmakers have publicly criticized Bezos' vast fortune, and conservatives have denounced Amazon's decision earlier this year to delete a book on transgender issues. Amazon responded at the time, saying it had a policy of refusing to sell books that frame LGBTQ identities as mental illness.

-The richest in the world-

Despite recent hurdles and antitrust concerns, Amazon's stock price has continued to rise, bringing its founder an ever-increasing fortune. Bezos became the world's richest person in 2018 when his net worth doubled, jumping from $81.5 billion in October 2017 to $160 billion the following October, thanks to a surge in Amazon's stock price.

He has overtaken Bill Gates, Warren Buffett and Mark Zuckerberg to become the first person to have a fortune exceeding $100 billion in Forbes' annual ranking of the 400 richest Americans.

He has been at the top of the list ever since, especially as the pandemic pushed Amazon's stock to new heights.

Elon Musk briefly surpassed Bezos as the world's richest person in January 2021, and French LVMH chief Bernard Arnault did the same in May, but a surge in Amazon shares put him back on top.

Since 2019, Bezos' fortune has increased by 73 percent, despite the fact that he gave a quarter of his stake in Amazon to his ex-wife Mackenzie Scott when they divorced that year.

About 90 percent of his fortune, about $176 billion, lies in his 10 percent stake in Amazon, Forbes estimates.

The rest is spread between his investment in space tourism company Blue Origin, various homes across the country, the Washington Post and a host of investments in at least two dozen tech and biotech companies.

Over the years, Bezos has sold part of his Amazon stake for about $27 billion (before taxes), to get tens of billions to spend as he pleases.

Time will determine how he chooses where to spend it.

Blue Origin capsule lands on Earth after space flight with ....