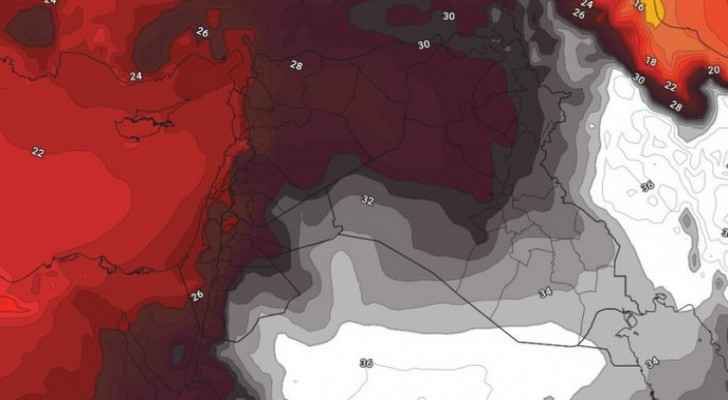 According to weather forecasts Wednesday, a hot air mass will prevail in the Kingdom, resulting in a rise in temperatures and relatively hot weather in mountainous heights.

The weather is expected to be very hot in the Jordan Valley, the Dead Sea, Aqaba and the Badia regions, resulting in temperatures in the forties.

Winds will blow west to northwest, and will be moderate in speed. Dust may rise in the eastern Badia due to winds becoming active in the afternoon hours.

During the night, the weather will be moderate in the mountainous heights and the plains, and will be remarkably warm in the lower areas, in conjunction with the continued high levels of humidity.

Experts advise individuals to avoid direct sunlight or prolonged sun exposure, especially in the afternoon. They called on everyone to avoid physical exertion during the peak heat hours (11am to 5 pm), in order to avoid sunstroke.

Hot weather is not expected to decline at the end of this week, meaning that the relatively hot weather will continue in various regions of the Kingdom, with moderate to warm weather prevailing during the night hours.

In India's Sri Ganganagar, beating the heat is a luxury ....

In India's Sri Ganganagar, beating the heat is a ....

In India's Sri Ganganagar, beating the heat is ....

In India's Sri Ganganagar, beating the ....