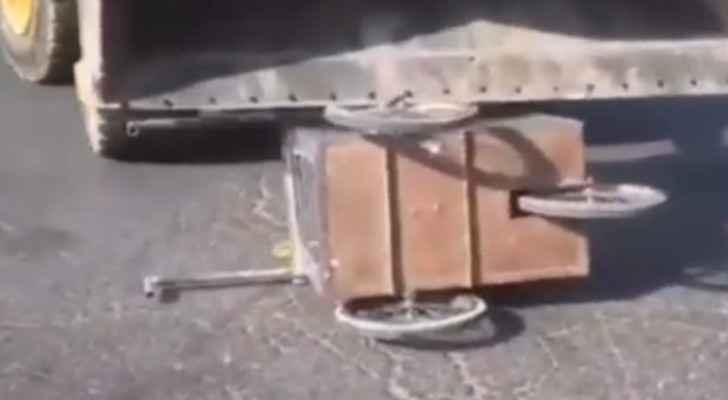 Social networking sites have been buzzing about the Greater Amman Municipality's (GAM) destruction of a shopping cart belonging to a street vendor in the central market, arguing that the cart was "unlicensed", in a scene that Jordanians described through social media as provocative and unjust.

Online, Jordanians said that the behavior of the GAM is considered an infringement on the livelihood of the people, and the market administration has practiced all acts of injustice and oppression against a vulnerable group among Jordanians.

Activists called on GAM to accomodate vulnerable groups of people - who are only trying to make a living - instead of exercising oppressive behaviour towards these people.

"We are all Jordanians in the end," said one activist.

Additionally, activists demanded that GAM put an end to the provocations and behaviors that contribute to more street congestion against state institutions, calling on the Mayor of Amman, Yousef Al-Shawarbeh, to provide a direct apology and restore the right and dignity to the owner of the cart which was smashed by one of GAM's bulldozers in the central market.

GAM workers appeared in the video, which was circulated by activists on social media, as they “mocked” the cart and its owner, as one of them told the bulldozer driver to “point the cart towards the Qibla.”

Traditionally, when a sacrificial sheep is slaughtered ahead of Eid, they place the animal in a way that their head is facing the Qibla, located in Mecca, Saudi Arabia.

In turn, Shawarbeh issued a decision Monday, after the clip was circulated on social media, to relieve the director of the central market from his position, stressing that these are individual actions that cannot be accepted.

Shawarbeh demanded an apology be issued to the man, while allowing him to return to his work "because hundreds are working in this honorable sector and any attack on them is considered an infringement on the livelihood of people and their families."

Prime Minister Bisher Al-Khasawneh also emphasized the need to deal decisively with violations in application of the principle of the rule of law for everyone and in accordance with the legal frameworks, noting in this regard that some methods of removing violating vendors or carts are unacceptable and must be resolved within the framework of the law, based on the "system of values and our authentic Jordanian heritage."

The Nesmo Center for Monitoring and Rejecting Hate Speech and Extremism considered the incident tantamount to provoking hate speech and violence.

The Center emphasized that such behaviours are among the most blatant violations of human rights.

They also called for granting free permits to all those working in this field and regulating it so that they are not subject to future encroachments.

GAM shuts down three facilities for ....