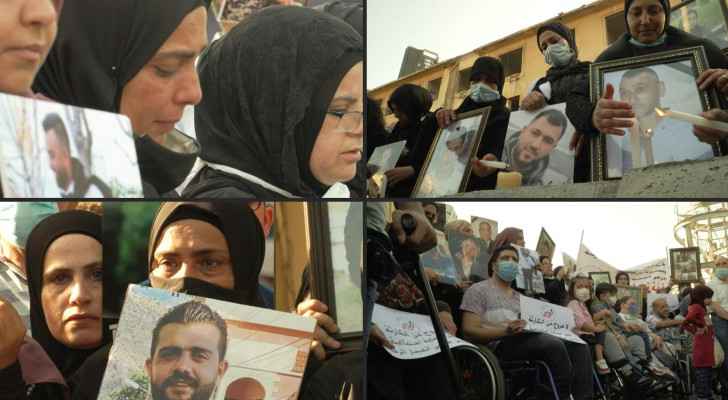 Dozens of relatives of those killed in Lebanon's port blast gathered Sunday, marking 11 months since the catastrophe.

The families begged for answers from a sluggish probe dedicated to prosecuting those responsible.

Hundreds of tons of ammonium nitrate fertilizer exploded on the dockside on Aug. 4 last year, killing more than 200 people, injuring thousands, and ravaging swathes of the capital.

Afterwards, information emerged indicating that top political and security officials, including then-PM Hassan Diab, had known about the explosives being stored unsafely at the port for years.

Among the men, women and children who rallied Sunday outside the port was 47-year-old mother of three Raghida al-Zein, dressed in black and clutching a portrait of her husband killed in the blast.

"I lost the pillar of our home, a friend. We have lost everything," she said, accusing officials of being "without a conscience."

Nearby a teenager and young girl held up a banner that read: "The wives and children of the Beirut port martyrs demand justice."

Ibrahim Hoteit, who lost his brother Sarwat, said the families of the victims needed to know the truth.

"We live in a country run by gangs," he said of the deeply divided political class, which many accuse of incompetence and corruption.

Retired army officer Elias Tanios Maalouf, 61, said he had lost his son George, a soldier who had been stationed at the entrance of the port when the fertilizer blew up on the evening of August 4, 2020.

"George was taken, and with it all the joy in life," he said.

Maalouf described the authorities as "corrupt and criminal," but said he held hope in the judiciary.

The judge investigating the blast said Friday he had summoned outgoing premier Diab and taken steps towards indicting several former ministers and security officials over the explosion.

A similar move led to his predecessor being thrown off the case in February, after causing an uproar among the political elite for issuing charges against Diab and former cabinet ministers.

Lebanon's government resigned after the explosion, but has remained in a caretaker capacity as the country's many political parties bicker over shares in a new cabinet.