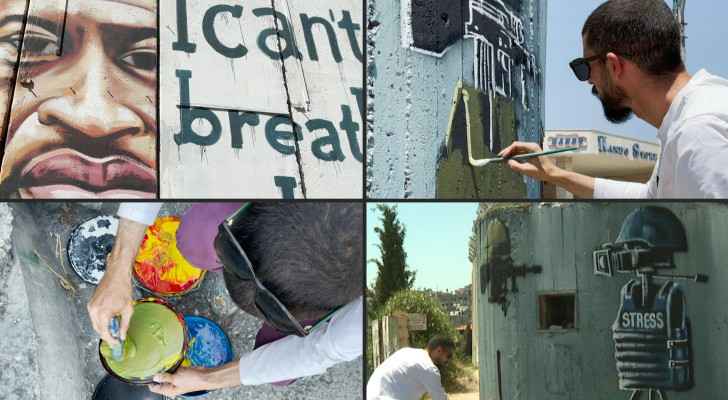 For Palestinian artist Taqi Spateen, a stroll along the Israeli Occupation-built barrier that runs through parts of Bethlehem amounts to an open-air exhibition of his murals denouncing their illegal occupation.

Spateen's work fills much of the concrete outside secretive artist Banksy's Walled-Off Hotel, a now iconic section of the barrier which the Israeli Occupation constructed to cut off the West Bank from the Zionist state.

His murals include an enormous portrait of George Floyd, the Black American killed by former US policeman Derek Chauvin.

"I feel like he's a Palestinian man. He has the same issues we have," Spateen told AFP, after completing his latest work showing a sniper rifle underneath east Jerusalem's Dome of the Rock mosque compound.

The murals "convey the image of Palestine to the world", Spateen said, after spending four hours to complete his latest work under a blazing sun, at the base of a watch tower.

The Israeli Occupation says the barrier, built mostly inside the West Bank, is necessary to prevent attacks, but Palestinians label it an apartheid wall, separating them from Jerusalem.

Spateen has also portrayed football star Lionel Messi kicking a ball through chains, an image inspired by Argentina's 2018 decision to call off a friendly with the Israeli Occupation, citing the Zionist state's treatment of Palestinians.

Spateen is about to begin a residency in France, where he has plans for a project on "the fogginess" of Palestinian society.

He said the project was inspired in part by images of tear gas fired by Israeli Occupation forces to suppress Palestinian protests and unrest as well as dust-filled photos from Gaza following air strikes.

Spateen stressed the importance of continuing his work on the concrete barrier, despite the "ugliness" of the structure.

"Graffiti is a means of resistance in Palestine," he said.