Twenty injured in Lebanon as currency continues to deteriorate 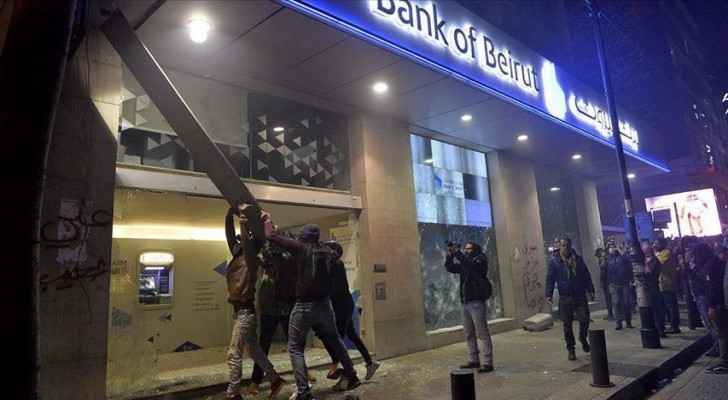 Nearly twenty protesters and soldiers were injured in Lebanon during demonstrations in the city of Tripoli, according to the Lebanese army and a relief organization Sunday, as the Lebanese pound continued to deteriorate to unprecedented levels on the black market.

The operations room of the Emergency and Relief Service, a local health organization in Tripoli, reported on Sunday that "six ambulance teams responded to the protests that took place in Tripoli" on Saturday evening.

It confirmed that it had treated 18 civilians and military personnel, and four of them were transferred to the city's hospitals.

The Lebanese Army Command said in a statement that nine soldiers were wounded in Tripoli, "after young men riding motorbikes threw sound bombs" at them.

The army statement also spoke of soldiers being "pelted with stones, which led to the injury of one of them" in another area of the city.

The price of the dollar has been fixed at 1,507 pounds since 1997, but the worst economic crisis in the country made the national currency collapse in the unofficial parallel market.

Money changers told AFP on Saturday that the dollar is being traded at a price between 17,300 and 17,500 pounds on the black market, while some indicated on social media that the price of the dollar had reached 18,000 pounds.

Lebanon is witnessing an economic crisis, which the World Bank warned this month that it ranks among the most severe and worst crises since the mid-nineteenth century, criticizing the official failure to implement any rescue policy amid political paralysis.

The crisis has recently intensified, as the Lebanese are waiting in long queues in front of gas stations that have adopted a policy of rationing the distribution of gasoline and diesel. This coincides with the shortages of a large number of medicines and a rise in the prices of mostly imported foodstuffs.

Since his appointment in October, Prime Minister-designate Saad Hariri has not been able to form a government, despite international pressures led, in particular, by France.