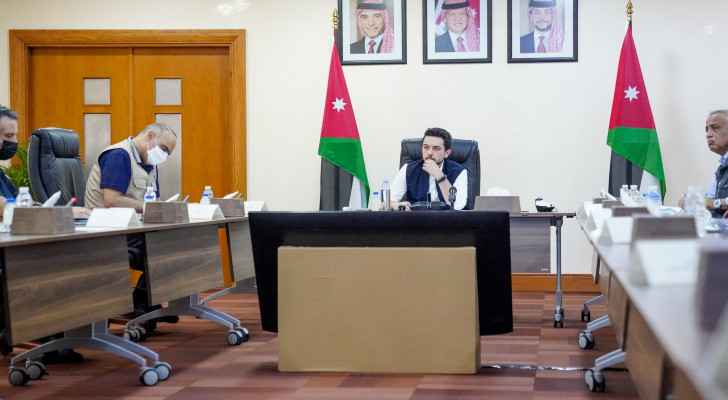 His Royal Highness listened to an explanation of the measures taken to ensure the implementation of the Golden Triangle operational plan, in parallel with adherence to public safety standards.

The plan, according to the speakers at the meeting, includes holding events, activities and entertainment programs in the three regions, to promote domestic and foreign tourism, which contributes to the gradual return of the tourist movement, leading to the sector's recovery.

The speakers pointed out that the approved health protocols have been circulated to tourist facilities, stressing the need to implement them and work with them accurately.

They pointed out that there is coordination between the various relevant authorities on accelerating the vaccination process against the coronavirus for workers in the tourism sector in the Kingdom, as the percentage of those who received the vaccine has so far reached about 90 percent, indicating that this percentage has become known to many agencies and tourism offices in region and the world.

His Highness pointed to the importance of continuing to receive vaccinations against the virus, which contributes to accelerating the reopening of sectors and the gradual recovery.

Notably, in efforts to bolster tourism and gradual recovery of the economy, the Tourism Promotion Authority announced the allocation of JD 500,000 to support flights between Amman and Aqaba, according to the Golden Triangle's operational plan, as Royal Jordanian will operate daily flights at subsidized prices, while Jordan Aviation will operate four flights per week.

It will also operate two weekly flights for tourists coming to Aqaba from Milan, Athens, Cologne, Rome, Sofia, London, Geneva and Manchester, in addition to one flight per week from Berlin, starting November.

In turn, the Crown Prince emphasized the importance of making all efforts to develop the tourism sector, so that it local tourism compete at the global level, through competitive prices, improving the quality of services and the tourism product, and promoting tourism for sites in Jordan.

His Highness said the Golden Triangle is one of the most important tourist destinations in Jordan, and classifying its sites as 'green areas' contributes to increasing the demand for domestic and foreign tourism.

The Crown Prince also expressed his pride in the efforts of the members of the security services, who play a key role in supporting the tourism sector.

Man rescued after getting stuck inside elevator in Aqaba

Man rescued after getting stuck inside elevator ....

Man rescued after getting stuck inside elevator ....

Man rescued after getting stuck inside ....