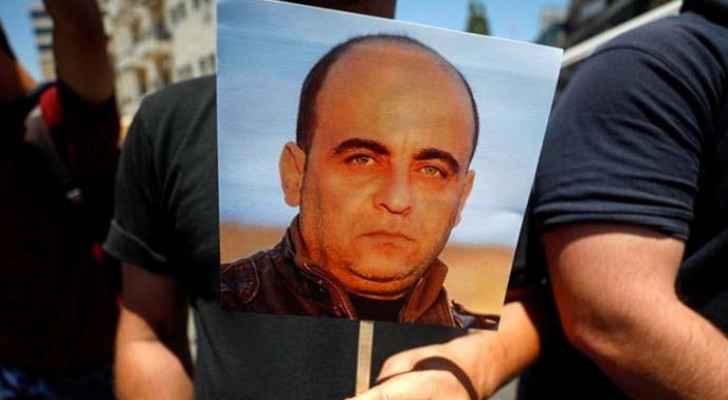 Banat was a human rights activist who was assassinated by the Palestinian security services (PA), at dawn on Thursday, after his house was stormed.

Many activists called him the "Khashoggi of Palestine."

The governor said in a press statement that the Palestinian security forces arrested Banat after the Public Prosecution ordered his arrest. According to the governor, Banat's health deteriorated and was transferred to the Hebron Governmental Hospital, where he was later pronounced dead.

According to one of Banat's relatives however, "a security force raided his house at 3:30 am, and he was severely beaten by about 20 soldiers." He added that Banat was alive and shouting when he got arrested.

Banat's cousin Ammar Banat said that the Palestinian security forces hid Nizar's body from the family. He added that the family searched for his body in all hospitals in Hebron but could not find it.

In turn, International bodies and UN institutions condemned the assassination by the PA.

Sadness pervaded social networking sites, amid widespread and great condemnation of what they described as a heinous and disgusting crime, during which Banat was brutally murdered in front of his family and children at the moment of his arrest at his home in the city of Hebron, southern occupied West Bank.

Activists likened his death to the murder of Saudi journalist Jamal Khashoggi inside his country's embassy in Istanbul.

An Activist, identified as Yahya Nafeh asked, "How can an authority in an occupied country demand that the world stop the crimes of the occupation while it practices the same behavior towards its people... Freedom is indivisible. #Nizar'sassassination."

The city of Ramallah witnessed demonstrations, with hundreds participating to condemn the assassination of Banat. The participants chanted for the departure of the PA and its trial for the crime.

Another activist, identified as Ahmed Nazzal wrote, "Silence about this crime is no less than the despicable act itself."

Another activist wrote, "Today's event reminds us of the slain cartoonist Naji Al-Ali. He had an intellectual disagreement with the authority some time before his assassination, and he expressed his disagreement with a pen and paper.... It is the same tragedy!"

Activist Ahmed Salem commented, "The assassination of the martyr Nizar Banat must not go unnoticed, and every official must be punished, and this is a crime that every free person denounces."