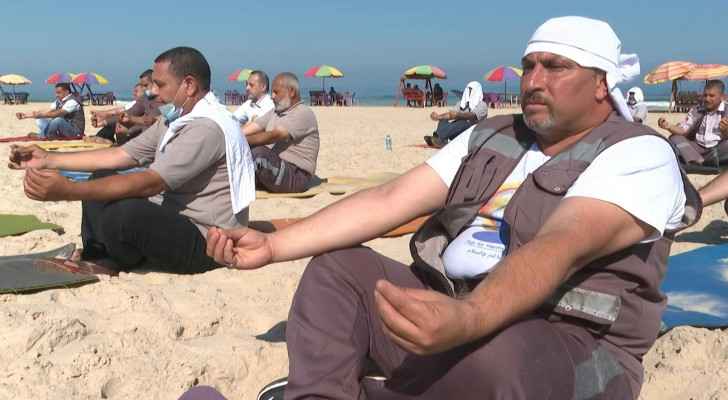 Palestinian paramedics who were on duty during the latest aggression on Gaza participated in a yoga session at a beach in Gaza City as part of a civil society physical and psychological support activity organized by the Positive Energy Club and coinciding with the International Day of Yoga.

"We chose to perform the activity of yoga because today is the International Day of Yoga. We chose paramedics (to teach yoga to) because they were among the most affected groups in the latest war, especially since they were working under bombardment and psychological pressure. They were transporting bodies which left negative effects on their psyche. It's very important that we reinforce their positive energy through the practise of yoga," said the director of the Positive Energy Club, Tahrir Murtaja.

A yoga instructer, Awad Abdel Bari, confirmed Murtaja's statements, saying, "Today, we are practising yoga specifically with paramedics who are the most affected by difficulties - we all face difficulties - but they deal with them firsthand as they absorb negative energy in order to give us the feeling of safety."

In turn, an officer from the Ministry of Health, Hassan Omar said, "After the latest war on Gaza, this yoga activity for paramedics is aimed at entertaining and providing psychological comfort after the psychological pressures faced during the war."