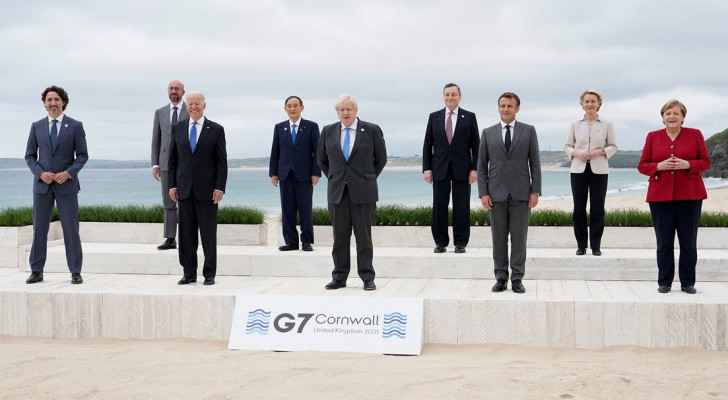 The global infrastructure plan presented by the G7 to developing countries could provide a credible alternative to the much-criticized "New Silk Roads" proposed by China- but several obstacles must be first overcome.

Eager to engage his allies in the strategic rivalry between the United States and China, Joe Biden persuaded the G7 to launch this initiative, which he called "Build Back Better World OP3W" and should allow investment huge in developing countries. But it is precisely in these countries that China builds its influence by investing billions of dollars.

Eswar Prasad, a professor at Cornell University who specializes in China, sums it up by saying that the Beijing project "did not deliver on many of its promises, and generated mistrust in many countries, thus providing an opportunity for the initiative to rebuild the world."

Beijing launched its initiative in 2013 to develop land and sea infrastructures to connect Asia, Europe and Africa with China.

But eight years later, many flaws have emerged under these projects, ranging from the “lack of transparency” of the bidding process, suspected corruption in obtaining contracts, or even a lack of respect for human rights, social rights and the environment.

For example, the construction of a hydroelectric power plant on the Indonesian island of Sumatra has been widely criticized for damage to the rainforest that is home to the world's rarest orangutan tapanuli.

Also, the West accuses Beijing of encouraging emerging countries to take on a lot of debt to implement projects that do not always bring economic benefit to these countries.

A group of experts from the Council on Foreign Relations wrote in their conclusions that "so far, the risks to both the United States and the recipient countries from implementing (the Chinese initiative) far outweigh the benefits."

In Africa in particular, China has succeeded in winning contracts by offering projects that are much cheaper than its competitors.

"Little by little, the Chinese have eliminated the competition of local companies. ... In Mali, there was only one bridge over the Niger River in Bamako, there are three bridges today, and soon there will be four," said a development specialist on this continent on condition of anonymity, stressing that the projects were accompanied by gifts presented to local political leaders, such as building villas for them.

The White House describes the G7 project as "a partnership for high-quality, transparent infrastructure led by major democracies to help reduce infrastructure needs of more than $40 trillion across the developing world."

“Rebuilding a better world is what we are already doing, but with stronger public mobilization, especially with the participation of the United States,” said Thierry Dieu, founder and director of the Meridium Group, which specializes in developing and financing infrastructure projects.

He added that the injection of more private money means that more transparency will be needed as well.

For the Africa development specialist, who preferred to remain anonymous, “the problem is not so much capital provision as it is absorbing large sums of money” linked to technical difficulties and endemic insecurity.

How can companies be persuaded to set up projects in the Sahel region, which is facing the terrorist threat? After implementing projects like schools, what is the assurance that teachers will agree to live away from it all? How can the infrastructure that is vulnerable to the attacks of local militias be secured once it has been built to blow it up?

“Rebuilding a Better World should resonate with leaders in developing countries...Many will be keen to expand their options” and capitalize on the “prestige” of the B3W brand, Matthew Goodman and Jonathan Hillman, two experts at the Center for Strategic International Studies, said in a note.

In return, they will have to accept more controls, higher costs, and longer implementation times.

But the big question remains what roles the International Monetary Fund and the World Bank, the two institutions historically involved in development projects, will play.

Because if they are to participate to demonstrate the importance of their role, they must also balance the competing interests of their major shareholders.

The IMF and World Bank, which did not want to comment, could become a “battle for influence,” Eswar Prasad says, “as the G7 and China try to tailor the lending models of these two institutions to meet their economic and geopolitical interests.”