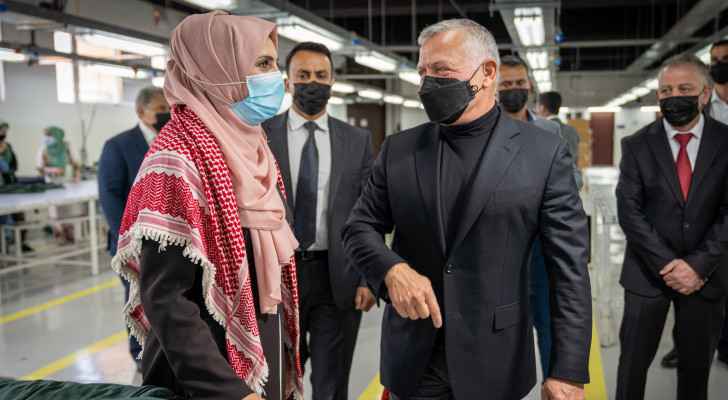 His Majesty King Abdullah II Wednesday visited a garment factory in the Northern Mazar in Irbid, which he had directed to establish on a previous visit to the governorate, to enhance development projects and provide job opportunities in the district.

The factory, which began production earlier this year, provides 120 jobs to the local community, mostly women, and is part of the Labor Ministry’s productive branches and units initiative.

The factory manufactures ready-made clothes for international brands, and exports to the US, the UK and several European countries.

During the visit, King Abdullah II listened to a briefing on this Jordanian investment, which is run and managed by Samad Garment Manufacturing Company Ltd, and is expected to increase the job opportunities it provides to 400 by the end of this year.

An agreement between the Labor Ministry, the Northern Mazar Municipality, and the Technical and Vocational Skills Development Commission included incentives for the investor, with the ministry covering half of workers’ salaries in the first year, in addition to paying a monthly sum of JD 25 for transportation, and a similar monthly amount for social security insurance.

The establishment of the factory was funded through Royal initiatives, in cooperation with the Planning Ministry.

A total of 30 factories were established across the Kingdom through the Labor Ministry’s Productive Branches and Units initiative, which has secured 7,307 Jordanians with jobs, a number that is expected to reach 9,000 by the end of this year.

Two injured in two-vehicle collision in ....

'Jordan has always been a source of regional stability': ....

'Jordan has always been a source of ....