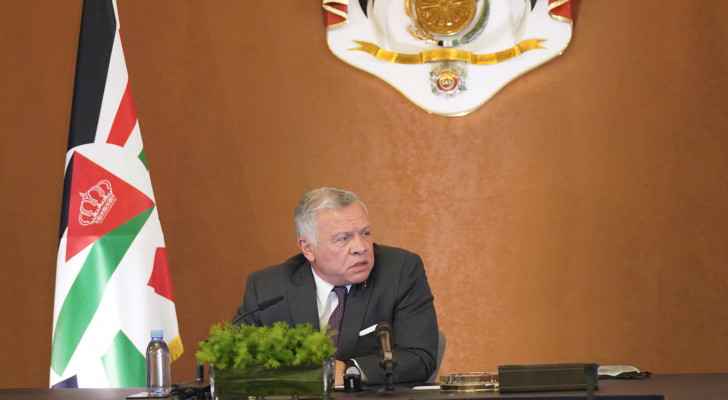 His Majesty King Abdullah II Tuesday reaffirmed that Jordan’s reform process, which is an ongoing effort over the history of the state, will continue in its second centennial.

At a meeting with the chairperson and members of the Royal Committee to Modernize the Political System at the Royal Hashemite Court (RHC), attended by His Royal Highness Crown Prince Al-Hussein bin Abdullah II, King Abdullah II said that the process of advancing the efforts of the ancestors will continue, with Crown Prince Al-Hussein at His Majesty’s side, to forge ahead on the course of modernization and development.

His Majesty underscored the magnitude of the committee’s responsibility and noted the vast experience of its members who represent various viewpoints across the political spectrum, asserting this will positively impact the panel’s outcomes.

Emphasising that the objective is to modernize the political system, leading to a parliamentary and partisan life befitting of Jordanians and Jordan’s democratic path, the King called for defining the end goal of the political development process, forming a clear plan to achieve it and communicate it to citizens, and arriving at a parliament that includes platform-based blocs.

His Majesty stressed the need to create an environment conducive to expanding the base of political engagement, and ensuring the active participation of women and youth in public life.

The King voiced hope to see Jordanians fully engaged in political life and confident in partisan work, reiterating that the door is open to all proposals and views and that everyone’s engagement in dialogue is needed, with the main goal being Jordan’s and Jordanians’ interests.

His Majesty said the political reform track should be in parallel to an economic and administrative track, noting Royal directives to the government to set a well-defined economic programme in the coming weeks with specific implementation timeframes.

King Abdullah II added that it is important for the programme to be in partnership with the private sector to achieve economic recovery and growth, and create employment, which is necessary to move the economy forward, establish development projects, and tangibly improve public services.

In his remarks, the Chair of the Royal Committee to Modernise the Political System, Samir Rifai, stressed that forming the committee reflects His Majesty’s keenness on continued development in Jordan, which has been the Hashemite legacy throughout history.

Rifai said the King’s guarantee to Jordanians that the committee’s output will be adopted and submitted to Parliament without interference or influence, “pushes us to go above and beyond”, stressing that there is no room for error.

The committee pledges to forego preconceptions and personal opinion, and to maintain an open attitude throughout its work, Rifai added, noting that the panel prioritises working towards fostering a legislative and political environment, and proposing election and parties laws, as well as recommendations for local administration, in addition to any necessary amendments to constitutional provisions and methods of parliamentary engagement.

The chair said the committee would do its utmost to achieve the Royal vision for progress and modernisation, drawing on the guidance offered by His Majesty’s discussion papers.

He noted the diversity of the committee members, which reflects the rich ideological and cultural components of Jordanian society.

“We will not hesitate to seek the guidance of Jordanian expertise, especially past recommendations by researchers, experts, and respected national figures in this field,” said Rifai, calling on those who have ideas and suggestions that could serve this national effort to bring them forward to any of the committee members for consideration.

Rifai added that legislative change and the responsibility of public institutions are not tied to a single law, but rather to an evolving legislative package, which ensures gradual and proportionate change as society evolves and anticipating its future aspirations. The panel’s work, he continued, is merely a part of this package, whose success relies on citizens’ engagement and follow-up.

He voiced the committee’s commitment to bringing forth outputs that befit Jordan and Jordanians and would be up to their trust, so Jordan can embark on its second centennial armed with a modern legislative achievement that propels it towards a robust political, parliamentary, and partisan life.

This, in turn, will lead to a parliament built on platform-based blocs and currents, ensuring progress in the manner the executive branch exercises its responsibilities, in service of the country’s aspirations and enhancing its bright, democratic image regionally and internationally, Rifai said.

RHC Chief Youssef Issawi and Director of the Office of His Majesty Jafar Hassan attended the meeting.