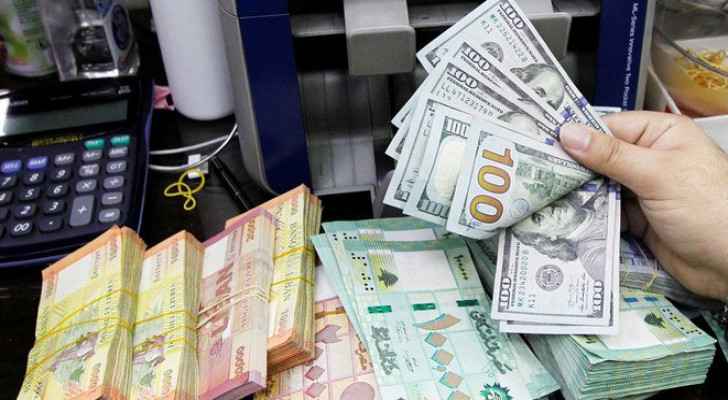 The Lebanese pound recorded a new record deterioration over the last two days as the lira crossed the threshold of 15,000 pounds on the black market Monday.

The downward spiral is part of the economic collapse that began nearly two years ago that has seen the lira lose 90 percent of its value.

Money changers, who refused to reveal their identities, told AFP that the exchange rate of the lira ranged between 15,400 and 15,500 pounds to the dollar on Monday. T

Since the summer of 2019, in light of the worst economic collapse in Lebanon, the lira has gradually begun to decline against the dollar, coinciding with a severe liquidity crisis and banks stopping providing depositors with their money in dollars, while the official exchange rate is still fixed at 1,507 pounds.

Last March, the exchange rate of the lira touched 15,000 against the dollar, before returning and improving somewhat. However, in light of a severe fuel crisis and political paralysis that cannot be resolved, the lira has continued since the end of last week to decline rapidly against the dollar.

In light of the economic deterioration exacerbated by the explosion of the Port of Beirut and the measures to confront the coronavirus, the Central Bank of Lebanon's dollar reserves began to dwindle. The authorities, prompted by the Central Bank, have been studying for months the rationalization or lifting of subsidies on the import of basic commodities such as flour, fuel and medicine.

Amid reports of residents’ panic about lifting or rationalizing subsidies, the country has been witnessing a fuel crisis for months, during which fuel prices have gradually increased, and intensified in the past weeks. The Lebanese are waiting in long queues in front of gas stations, which have adopted a policy of rationing in the distribution of gasoline and diesel.

This coincides with the interruption of a large number of medicines, which prompted pharmacies to announce a two-day strike last week. The prices of bread and all imported foodstuffs have also increased.

The World Bank warned this month that Lebanon's economic and financial crisis ranks among the ten most severe crises, and perhaps among the three worst since the mid-nineteenth century, criticizing the official failure to implement any rescue policy amid political paralysis.

Drug importers in Lebanon warn country is running out of ....