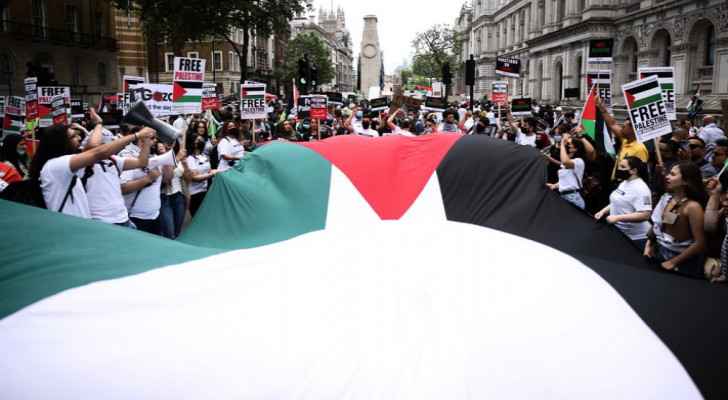 Hundreds of Britons gathered in front of the government headquarters in London Saturday, in solidarity with the Palestinian people and to end what they describe as Britain and G7 complicity in Israeli Occupation war crimes, in conjunction with the work of the G7 summit, which began Friday in England.

The demonstrators then organized a march within the so-called "G7 Resistance Action Day for International Justice."

Organizers say the G7 includes the largest suppliers of weapons and military technology that strengthen the Israeli Occupation oppressive regime.

Activists participating in the march published videos and pictures showing the solidarity activists carrying Palestinian flags and chanting slogans in support of the cause.

The participants in the march demanded that the British government impose sanctions on the Israeli Occupation and recognize the state of Palestine.

The demonstration comes after a series of similar demonstrations in solidarity with the Palestinian people called by popular organizations, including the "Stop the War Coalition" and the "Palestine Solidarity Campaign" and others.