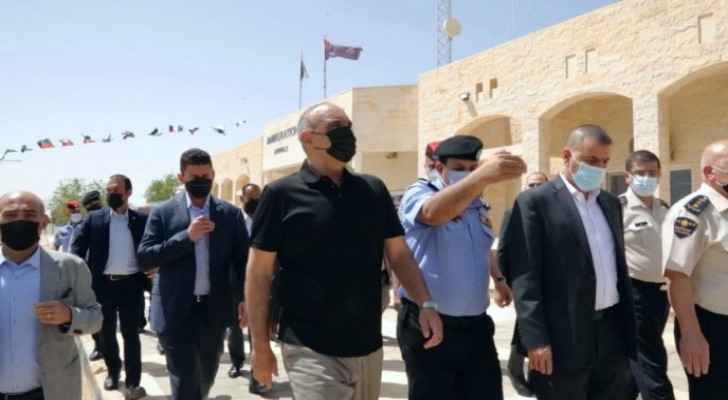 During his field tour at the border center, which is vital for the movement of people and goods between Jordan, Saudi Arabia and Gulf states, Khasawneh was briefed on the measures taken by the authorities operating at the border center to facilitate travelers leaving, returning or coming for tourism in Jordan ahead of the summer season.

During a meeting he held with representatives of the authorities working in the center, and in the presence of a number of ministers, Khasawneh confirmed that the government worked to provide the center with a set of health equipment and supplies to ensure adherence to COVID-19 related measures, as well as equipment to strengthen the infrastructure to facilitate the movement of travelers and transport.

The PM referred to His Majesty King Abdullah II's continuous directives to the government to facilitate procedures for citizens and provide all necessary facilities for travelers and visitors to Jordan.

He affirmed the government's support for the cadres working in the center, including the cadres of the Ministry of Interior, its agencies, and the customs department, and its readiness to provide them with the necessary needs.

He thanked the center's workers for their great efforts.

Khasawneh stressed that the border posts are the gates to the homeland for visitors to Jordan, emphasizing the need for workers to reflect the true image of Jordan.

In turn, the Interior Minister, Mazen Al-Faraya, indicated that the number of counters designated for stamping passports has been increased to facilitate citizens and travelers, in addition to equipping the center with a laboratory to test for the coronavirus.