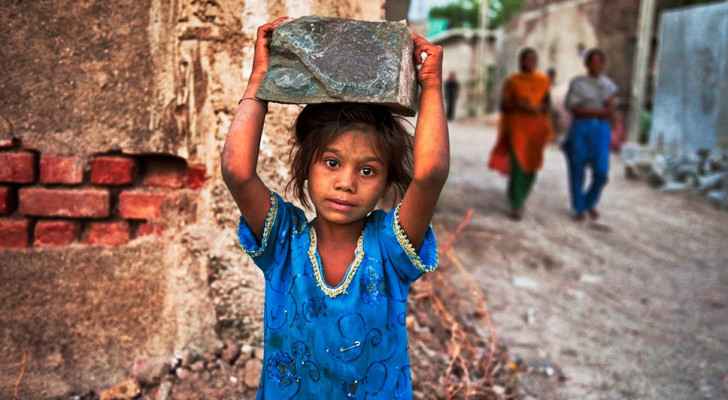 The United Nations (UN) announced Thursday that the number of working children in the world rose for the first time in two decades, warning that millions more are at risk of working due to the repercussions of the COVID-19 pandemic.

The International Labor Organization (ILO) and the United Nations Children's Fund (UNICEF) said in a joint report that as of the beginning of 2020, "the number of working children in the world has increased to 160 million, an increase of 8.4 million children in the past four years."

The report warned that "an additional nine million children in the world are at risk of being forced to work by the end of 2022 due to the pandemic," while "this number may rise to 46 million if they do not have access to necessary social protection."

The report pointed out that "the additional economic shocks and school closures due to COVID-19 mean that children who are already working may work longer hours or in worsening conditions, while many others will be forced to engage in the worst forms of child labor due to the loss of jobs and incomes of members of vulnerable families."

The report, entitled "Child Labor: Global Estimates for 2020, Trends and the Way Forward" was published on the eve of the World Day Against Child Labor on June 12, and it is issued once every four years.

The report lamented that "progress towards ending child labor has stalled for the first time in 20 years, reversing the previous trend that recorded a decrease in the number of working children by 94 million between 2000 and 2016."

The report noted, "a significant increase in the number of working children in the age group five-11 years, who today represent more than half of the total global number," noting that within this age group, "the number of children engaged in hazardous work, that is, work that is likely to harm their health, has increased" by 6.5 million since 2016 to 79 million.

Examples of hazardous work sectors for children include mining and fishing, as well as the fact that these little hands work more than 43 hours a week, making it almost impossible for them to attend school.

"The new estimates are a wake-up call. We cannot stand idly by while a new generation of children is at risk," the report quoted Guy Ryder, Director-General of the ILO, as saying.

"We are at a pivotal moment, and much depends on how we respond. This is the time for renewed commitment and energy, in order to overcome the crisis and break the cycle of poverty and child labour," he added.

"We are losing the battle against child labour, and the past year has not made this fight any easier," UNICEF Executive Director Henrietta Fore said in the report.

"We urge governments and international development banks to prioritize investment in programs that can take children out of the workforce and return them to school, and in social protection programs that help families avoid these options entirely."

The report drew in particular to the situation in sub-Saharan Africa, where "population growth, recurrent crises, extreme poverty and weak social protection measures have led to an increase in the number of working children by 16.6 million over the past four years."

As for the sectors in which children work, the report said that "the agricultural sector employs 70 percent of working children (112 million), followed by 20 percent in services (31.4 million) and 10 percent in industry (16.5 million)."

According to the report, "child labor is more prevalent among boys than girls of all ages" but "if we calculate that household chores are practiced for at least 21 hours per week, the gender gap in child labor is narrowing."

Also, "the prevalence of child labor in rural areas (14 percent) is three times higher than in urban areas (five percent)".

Warning that “working children are at risk of physical and psychological harm,” the report stated that “work threatens their education, restricts their rights and opportunities in the future, and leads to vicious cycles of poverty and intergenerational child labour.”

The International Labor Conference will be held from June 10-17, which will discuss the issuance of the new global estimates and the next road map.