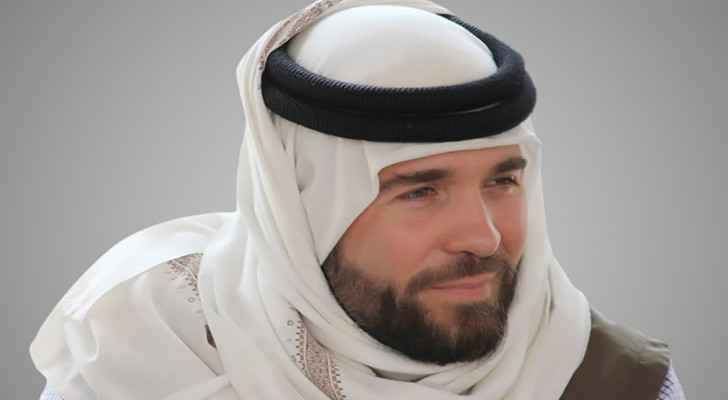 His Royal Highness was born in 1981 to His Majesty the late King Hussein bin Talal and Her Majesty Queen Noor.

He is a 41st generation direct descendant of the Prophet Mohammad and the youngest brother of His Majesty King Abdullah II. Prince Hashim completed his primary education in Amman and later graduated from high school in the United States in 1999.

In 1999, he attended the Royal Military Academy Sandhurst in the United Kingdom, from which he graduated in 2000, commissioning as a second lieutenant in the Jordan Armed Forces-Arab Army. He received several awards, including an award for the best aggregate mark in his academic studies for non-British officers.

Prince Hashim graduated with distinction from Georgetown University’s Edmund A. Walsh School of Foreign Service on August 12, 2005, and subsequently completed his higher education in Quran studies at Balqa Applied University in Jordan, graduating on Sept. 5, 2006. On Dece. 1, 2014, he also earned a master’s degree in Defence Studies from King’s College London in the United Kingdom.

During Prince Hashim’s career in the military, he rose through the ranks of the Special Operations Command, serving in all three of its branches Special Forces, Counterterrorism, and the Rangers. In 2015, he was assigned command of the 61st Royal Rangers Battalion (Al Maghaweer) which is specialised in urban, desert, and advanced mountain operations. Prince Hashim’s last active military role was as adviser to the Chairman of the Joint Chiefs of Staff for Special Forces and Rapid Reaction Forces.

During his military career, Prince Hashim completed his Platoon Commanders’ Battle Course in the US at Fort Benning in 2007, where he achieved the best marks among international officers taking part in the training. In 2009, Prince Hashim participated in and successfully completed the Infantry Company Commanders Course in the UAE during which he achieved the highest level of academic excellence, and in 2014 he attended the Advanced Command and Staff College in England (ACSC17) and successfully completed it, earning his Post Staff College (Joint) PSCJ.

On Jan. 12, 2017, a Royal Decree was issued appointing Prince Hashim as His Majesty’s Chief Royal Councillor, and he continued his service until his resignation in Sept. 2020.

Prince Hashim has been sworn in as Regent on several occasions and accompanied King Abdullah II on several official functions.

Prince Hashim is the head of Alfaris International Horseback Archery Championship and is a proficient blade-smith. He also enjoys hiking.

His Royal Highness is fluent in Arabic and English. He studied Hebrew in university and he is a student of the Turkish language.

Minister of Transport to Roya: governmental ....

Minister of Transport to Roya: governmental ....

Minister of Transport to Roya: ....