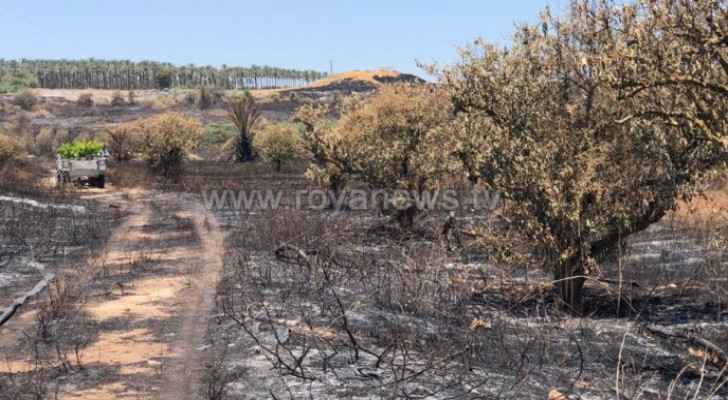 She added that the fires caused heavy losses and damaged hundreds of dunums of crops inside the northern Jordan Valley.

She stressed that the situation in the Jordan Valley is very difficult and needs immediate intervention from the government and the private sector.

Earlier this week, Minister of Agriculture Khaled Al-Hunaifat said that farmers in the Jordan Valley whose farms were damaged as a result of the fire will be compensated for their losses next week through the risk fund.

The fire caused damage to hundreds of dunams planted with citrus and wheat in the northern Jordan Valley, in addition to damaging water pumps and pipes.

Hunaifat revealed that Jordan will demand the Israeli Occupation authorities to pay compensation following the incident, in accordance with international agreements.

May 31, the Civil Defense Directorate's (CDD) firefighting cadres in Irbid, along with other concerned authorities in the Northern Jordan Valley Brigade, contained a fire that broke out on the western edge of the Jordan River from the occupied Palestinian territories to Jordanian agricultural lands.

The administrator of the Northern Valleys Brigade, Ali Al-Hawamdeh, said the fire spread about four km on the border strip of the Jordan River.