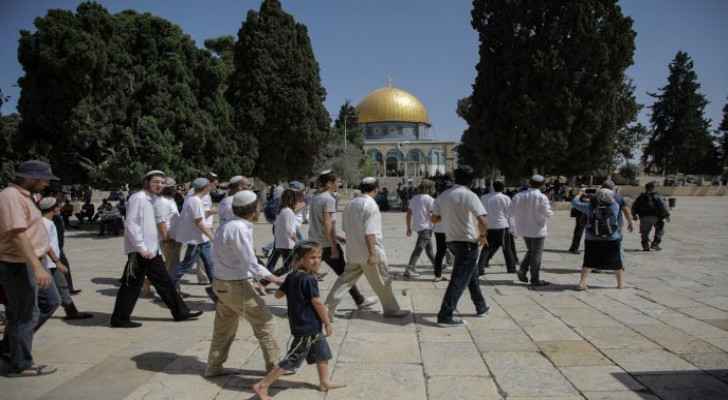 Monday, dozens of settlers stormed Al-Aqsa Mosque, from the side of the Mughrabi Gate, all while under the protection of the Israeli Occupation Forces (IOF).

According to the Palestinian news agency WAFA, dozens of the settlers forcibly entered the mosque courtyards during the early morning hours and carried out provocative tours in the vicinity, until leaving from the side of Al-Silsila Gate.

In Ramallah Monday, the IOF arrested four young Palestinian men, while storming the city, including the town of Birzeit and the Jalazone Refugee Camp.

WAFA quoted local sources as saying that the IOF arrested two freed prisoners, identified as Rami Fadayel, from Al-Tira neighborhood in Ramallah, and Ashraf Abu Aram, during the storming of Birzeit town in the north.

The other two men arrested were identified as Majd Al-Ramahi and Atta Sharakah, from the Jalazone camp, northeast of Ramallah.

Sunday evening, settlers attacked a Palestinian vehicle travelling down the road connecting Nablus to Qalqiliya in the northern West Bank, injuring a number of passengers, according to WAFA citing official sources.

An official in the West Bank monitoring Israeli Occupation settlement activities, Ghassan Daghlas, "said that a group of stone-and-club-wielding settlers intercepted and attacked a vehicle with a Palestinian registration plate transporting passengers from Burqa village, north of Nablus city, to Qalqiliya, inflicting moderate wounds on them," according to WAFA.

Daghlas said two of the Palestinians were immediately transferred to a nearby hospital for urgent treatment.

The settlers came from Yitzhar, a colonial settlement notorious for its radical Zionism.