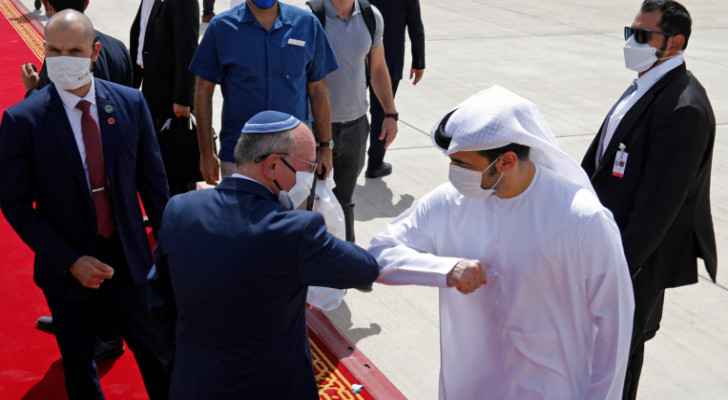 Trade relations between the UAE and the Israeli Occupation, which are currently estimated at half a billion dollars, are on an upward trend after "discomfort" caused by the recent massacre in Gaza, which killed more than 250 people.

Last September, the UAE became the first Gulf country to sign an agreement to normalize relations with the Hebrew state, before Bahrain followed suit, opening up prospects for trade cooperation between the two most diversified economies in the Middle East.

But the repression of demonstrations in occupied East Jerusalem, and then the Israeli Occupation raids on Gaza that killed 254 Palestinians, including 66 children, all prompted the new Arab partners of the Hebrew state to publicly condemn it.

"In terms of trade (...) no one really knows what the number is, but we are looking at about half a billion dollars so far," Occupied Jerusalem deputy mayor and co-founder of the UAE-Israel Business Council Flor Hassan Nahum told AFP.

"A few months ago the figure was at $300 million, and I think that gave a boost in the past few months," she said on the sidelines of a trade forum to boost relations between the two sides, particularly in the areas of health, renewable energy and technologies.

The UAE and the Israeli Occupation, whose economies have been affected by the coronavirus, hope to achieve major gains from the normalization agreement brokered by the United States.

The two countries have already signed several agreements, including the conduct of direct flights, the exemption of citizens from visas, and the protection of investments, science and technology.

According to the Israeli Occupation official, the recent events created "unease" with Emirati trading partners during the conflict.

"It wasn't easy. I participated in different forums for the Israelis and the Emiratis and there were some uncomfortable conversations, but they were important," she said.

The escalation between the Israeli Occupation and Palestine took place against the background of the issue of Sheikh Jarrah neighborhood in East Jerusalem, where dozens of Palestinian families are at risk of being illegally forcibly displaced from their homes in favor of settlement associations.

Amnesty International said that the Israeli Occupation used "arbitrary and brutal force against largely peaceful Palestinian demonstrators" in the clashes in Occupation East Jerusalem, which left hundreds of demonstrators and dozens of police injured.

The events developed into a bloody military campaign against the Gaza Strip, which is controlled by Hamas and inhabited by about two million people.

On May 20, the Israeli Occupation and Hamas reached a ceasefire through Egyptian efforts, and it came into effect at dawn on Friday, May 21, after an escalation that left 254 Palestinians dead.

These events sparked strong condemnations from Arab countries and their residents, including the UAE, where social media users called for more solidarity with the Palestinians or even a boycott of the Israeli Occupation.

Emirati lawyer and writer Habib Al Mulla wrote on Twitter in the middle of last month that the Israeli Occupation had lost "the public relations campaign that it undertook (...) in the past two decades and improved its image not in front of international opinion, but to some extent even in the region, so that Israel's acceptance became the original ".

"We had very open discussions about the points of contention. There were a lot of questions about the military campaign, its proportionality, the issue of Sheikh Jarrah (neighborhood) in Jerusalem, and what happened in Al-Aqsa Mosque," Fleur told AFP.

Last week, the United Nations Human Rights Council decided to open an international investigation into human rights violations committed in the occupied Palestinian territories and the Israeli Occupation since April, as well as into the "root causes" of the tensions.

Immediately, Israeli Prime Minister Benjamin Netanyahu denounced what he considered a "flawed decision" that "encourages terrorists around the world."