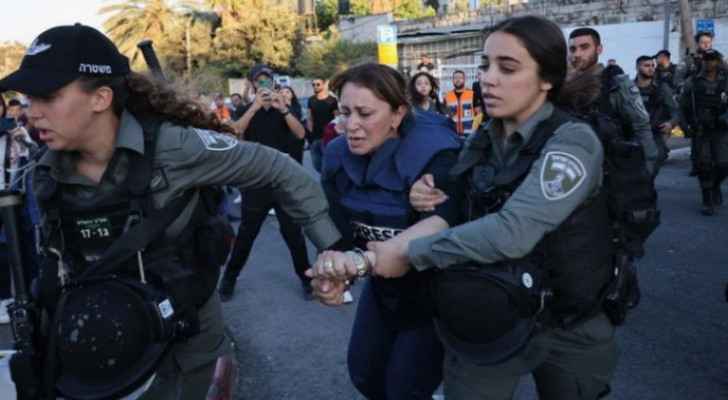 Saturday, an Al-Jazeera journalist, Givara Budeiri, was released from custody after she was violently arrested by the Israeli Occupation Forces (IOF) while covering demonstrations in the occupied East Jerusalem neighbourhood of Sheikh Jarrah.

The IOF brutally assaulted Budeiri while arresting her and destroyed the equipment she had belonging to the Al-Jazeera cameraman, Nabil Mazzawi.

In turn, her arrest sparked outrage and rejection from press freedom advocates and media watchdogs as the video of the assault circulated on social media platform.

“They came from everywhere, I don’t know why, they kicked me to the wall,” said Budeiri to Al-Jazeera minutes after she was released from Israeli Occupation custody.

“They kicked me inside the car in a very bad way … they were kicking me from everywhere.”

Budeiri was doing her job and covering a sit in for the 54th Naksa anniversary, wherein Zionists occupied East Jerusalem, the West Bank and the Gaza Strip in 1967.

Notably, she was wearing a press jacket when she was arrested. Budeiri said she holds an Israeli Occupation Government Press Office (GPO) card.

During her arrest, she told reporters she was treated like a criminal. She was not allowed to remove her jacket or closed her eyes, noting the IOF accused her of kicking a solider, which she denies.

Budeiri said she was released on the condition that she does not go to Sheikh Jarrah for 15 days.