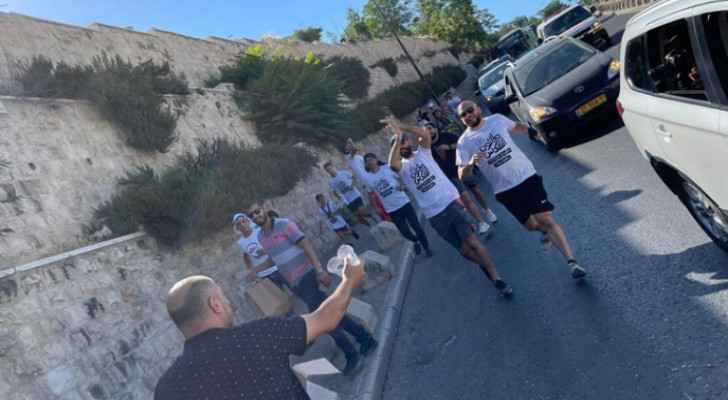 Friday, the Israeli Occupation Forces (IOF) attacked and suppressed the ‘Jerusalem Marathon,’ which was launched in front of the entrance to the besieged Sheikh Jarrah neighborhood towards the Silwan neighborhood, in occupied Jerusalem.

The marathon was organized by Palestinian protesters who wanted to raise the voice against the Israeli Occupation’s plans to forcibly uproot dozens of Palestinian families from the aforementioned neighborhoods.

According to the Palestinian WAFA news agency, the IOF attacked marathon participants by firing tear gas and stun grenades.
The marathon set out from the Sheikh Jarrah neighborhood, through the Lions Gate in the Old City, to the Batn al-Hawa area in the Silwan neighborhood, chanting slogans in solidarity with the oppressed residents.

The IOF also attacked the Palestine TV crew and destroyed one of their cameras.

WAFA confirmed all participants who were dispersed are citizens of occupied Jerusalem and the occupied 1948 lands.

A marathon participant, 24-year-old Asaad Dari, told WAFA that the marathon aims to raise the voice to reveal the true nature of the Israeli Occupation and highlight the dangers of displacement and forced evictions facing many Palestinian families in occupied Jerusalem.

In Sheikh Jarrah at least 28 families are being threatened with forced evictions, and 86 families in the Silwan neighborhood are facing Zionist threats of uprootings from their homes in favor of settlers.