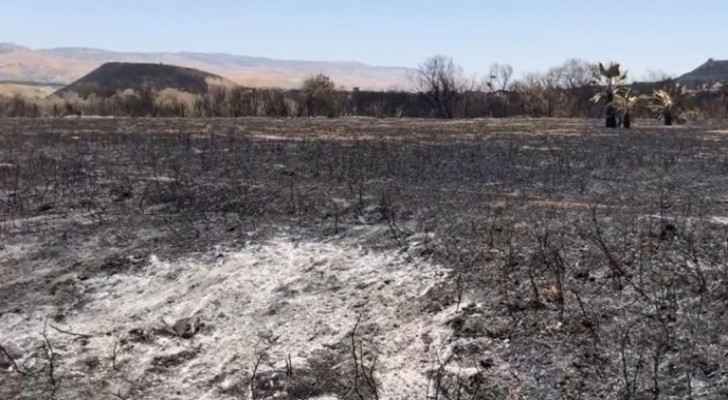 Thursday, The Arab Group for the Protection of Nature (APN) took the initiative to compensate a group of farmers whose farms were damaged by a recent fire, which extended Monday from west of the Jordan River to Jordanian agricultural lands in the northern Jordan Valley, with fruitful seedlings.

APN said in a statement that it seeks, through this symbolic initiative, to shed light on the suffering of these farmers, who are exposed to such events annually, in the most fertile of agricultural lands.

Those benefitting from this initiative, which distributed hundreds of trees, is a number of farmers whose lands and fruit trees were devoured by the fire.

In turn, the farmers thanked the organizers of the initiative, pointing out the need for everyone to pay attention to this tragedy.

May 31, the Civil Defense Directorate's (CDD) firefighting teams in the northern Jordan Valley contained a fire that broke out on the western edge of the Jordan River from the occupied Palestinian territories to Jordanian agricultural lands.

The administrator of the Northern Jordan Valleys Brigade, Ali Al-Hawamdeh, said the fire spread about four kilometers on the border strip of the Jordan River.

Compensations to owners of shops affected by Downtown ....

Compensations to owners of shops affected by ....

Compensations to owners of shops affected by ....

Compensations to owners of shops ....