Beyond Palestinians, animals pay price for brutality of Israeli Occupation aggression in Gaza

Beyond Palestinians, animals pay price for brutality of Israeli Occupation aggression in Gaza 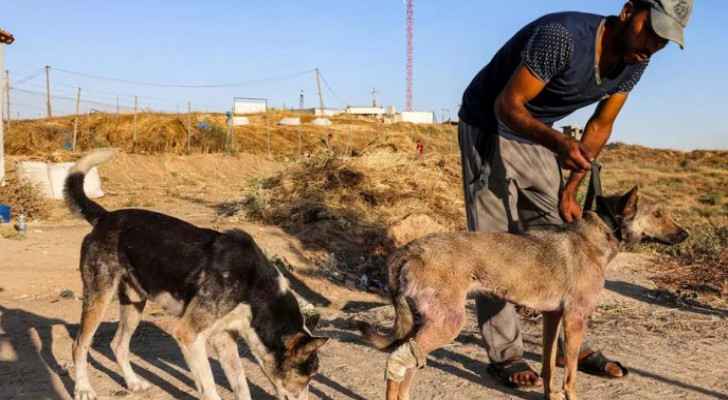 In light of the panic caused by the Israeli Occupation raids on Gaza last month, a 9-year-old Palestinian girl, Nariman Akkad, was forced to leave her birds and fish at home. The suffering of domestic animals during the recent war was an additional source of grief for this child, like many residents of the Strip.

The recent aggression lasted eleven days, as the Israeli Occupation ruthlessly poundied the beseiged Palestinian enclave, killing around 254 Palestinians in the Gaza Strip, including 66 children according to the local authorities.

More than 1,900 people were injured in the Gaza Strip too.

However, the situation also reflected negatively on domestic animals, which became an additional source of concern for their owners.

Akkad held a glass bowl in which she puts her fish which survived the Israeli Occupation bombing near her home in Khan Yunis, in the southern Gaza Strip.

Her second fish did not survive.

After an air strike targeted the neighborhood May 13, Nariman went with her cousin Mahmoud to the house and found the fish among the rubble and destruction.

A video spread on social media of the two happy to find the fish.

"We saved her from the house," said the young boy in the video, smiling, while holding the bowl. Nariman replied, "We will go now to get the birds."

The family of Nariman Al-Akkad was forced to vacate the house after receiving a phone warning that they had to leave because the Israeli Occupation planes would bomb the headquarters of a bank adjacent to them.

Nariman was given two gold fish, as well as two blue birds, which she named "Alloush" and "Maloosh", as a gift from her father on her sixth birthday.

The girl said, "I insisted on returning home with my father after the bombing stopped, to take her with me and bring Eid clothes."

Nariman found stones and rubble covering her clothes, which she put on her bed, which was broken, while the two windows of the room fell.

She continues, "I heard Alloush and Malush screeching under the rubble, and I found the fish tank had been broken."

Her father, Bassam Al-Akkad, said that Nariman "insisted on taking the two fish, and we found the fish tank broken. We found a little water in it, then we quickly moved the fish to the small bowl and carried the fish, and took the bird cage."

At an animal care center west of Gaza City, Amani Abu Shaaban cuddles her cat, Selena, waiting for her turn.

"My cat has been very scared since the war and refuses to eat and her hair is falling out, the sound of the mobile phone ringing is terrifying."

The veterinarian, Mutasem Kaddoura, examined two emaciated cats, explaining that one of them needs surgery due to a fracture of the femur, while the other suffers from dehydration and malnutrition.

Dozens of animal owners have been visiting the clinic every day since the end of the Israeli Occupation raids, according to the vet, who complains about the lack of resources.

"The veterinary medical situation is tragic in Gaza. We use human x-rays and platinum screws to fix the bones of children to treat animals," he said.

In the only shelter for stray dogs southwest of Gaza City, the dog Sasha sustained injuries in her left eye, while several other dogs were injured to varying degrees during to the airstrikes, according to its founder, Saeed Al-Arr.

Arr, who received training in Russia to teach and tame these animals, indicated that "at least three dogs in the shelter need surgical intervention, including amputation of one of the legs."

He was unable to reach the shelter for several days during the intense bombings.

"The dogs that stayed in the shelter were frightened and hungry," he continued.

Adel Al-Wadieh, 30, was one of the residents of the area who, despite the bombing, came to the shelter to feed the dogs.

"The dogs were welping loudly from fear and hunger. I was feeling sad, so I took the risk of going there to put food for them as close as possible."

Dozens of stray dogs fled the shelter out of fear.

Arr points to a nearby area, saying, "There we buried the donkey and the horse, as we found them dead after being hit by shrapnel."