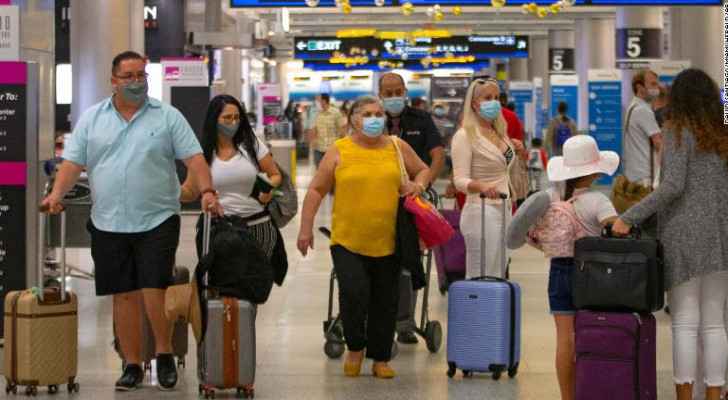 Here are the latest developments related to the spread of the coronavirus in the world in light of the latest numbers, new measures and notable events on Monday.

- Expanding the vaccination campaign in France -

From Monday, France will abandon the criteria for age and health status to open vaccine eligibility for all its adult population, in a “essential stage” to avoid a new epidemiological boom in parallel with a gradual easing of the restrictions imposed in the country.

Speaking to the LCA network, Alain Fischer, the official in charge of vaccines in the French government, said that on June 15, "there is a high probability that we will have exceeded" the government's goal to vaccinate thirty million people, considering that the expansion of the vaccination campaign is an "essential stage" to protect citizens and" Returning to an increasingly normal life.

The Organization for Economic Cooperation and Development on Monday raised its forecasts for global economic growth for 2021 and 2022 to 5.8 and 4.4 percent, respectively, but warned of a new setback for the economy due to "headwinds" that are still ongoing.

The organization expressed its concern, especially about the slow pace of vaccination campaigns against Covid-19 in poor countries and the tension in financial markets.

- Argentina will not host the Copa America -

Two weeks before the initial start of the Copa America football tournament on June 13, the South American Football Confederation (CONMEBOL) announced the exclusion of Argentina from hosting due to the Covid-19 pandemic.

The South American Football Confederation confirmed that it had alternative solutions, without giving further details.

On Sunday evening, Burkina Faso received about 115,000 doses of the AstraZeneca vaccine, funded by the COVAX mechanism, which will allow the West African nation to start the first stage of vaccination June 2.

The country, which recorded 13,430 cases of the Covid-19 pandemic and 166 deaths, is one of the last West African countries to start vaccinations.

Hanoi will stop receiving international flights at Noi Bai Airport from Tuesday, in light of a new wave of coronavirus infections hitting Vietnam.

The Prime Minister said in a televised speech, "During this latest wave, we have a greater number of infections among children, whether in schools or in evening lessons," explaining, "We will take advantage of the June holiday to vaccinate students."

- WHO will strengthen its capacity -

Members of the World Health Organization, which is at the fore in the fight against Covid-19, adopted a resolution to strengthen the organization's capabilities, after a week of discussions.

The main item on the meeting's agenda was the reform of the organization and its ability to coordinate the response to global health crises and avoid future epidemics, at a time when the health organization and the international community were unable to remedy the Covid-19 epidemic.

The coronavirus has killed at least 3,543,125 people in the world since the World Health Organization office in China reported the emergence of the disease at the end of December 2019, according to a census conducted by Agence France-Presse based on official sources Monday at 10:00 GMT.

The World Health Organization considers, taking into account the excess death rate directly or indirectly related to Covid-19, that the actual outcome of the epidemic may be two or three times greater than the officially declared outcome.