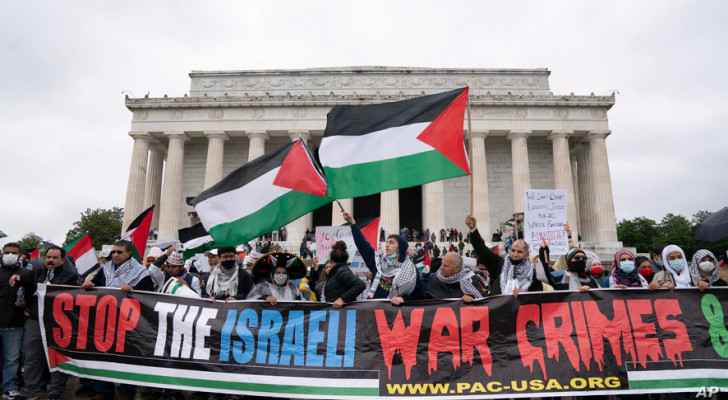 More than a thousand people demonstrated on Saturday in Washington in defense of the rights of the Palestinians, calling in particular for the end to US aid to the Israeli Occupation.

Participants gathered in front of the Lincoln Memorial, a symbolic place of protest in the American capital, chanting slogans expressing their desire to see a free Palestine and demanding an end to apartheid by the Israeli Occupation against the Palestinian people.

Sharif Salami, who participated in the demonstration, told AFP, "We hope to send a clear message to the United States government that the days when it supported the Israeli state without repercussions are over."

The 39-year-old, Washington-based lawyer added, "We will face any politician who continues to finance arms to Israel. We will oppose them, we will vote against them, and we will finance their opponents, until we beat them at the polls."

"People have woken up and resisted. Whether it is related to Jewish youth, Muslim youth, black youth, or white youth, there is a turn [for] change and the liberation of the Palestinian people and all oppressed peoples."

As for Lama Al-Ahmad, who came with friends from the neighboring state of Virginia, she said that there is a "tremendous change" taking place in the United States in favor of the Palestinian cause.

"We just want the world to view us as human beings. We are not terrorists," added the 43-year-old housewife.

Al-Ahmad comes from Palestine and grew up in the United Arab Emirates before arriving in the United States "a little over 20 years ago."

She expressed the hope that "(the Palestinians) will be given their rights, so that people like her can return and that her children will be able to visit the Palestinian lands."

Between May 10-21, 254 Palestinians, mostly Gazans, were killed by the Israeli Occupation, including 66 children. Thousands of others were injured across historical Palestine.