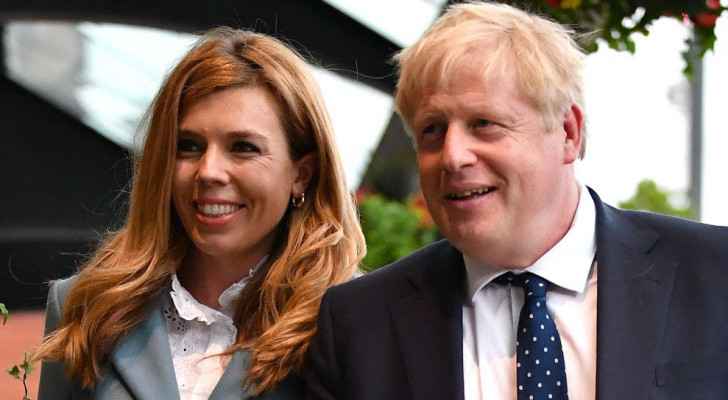 The "Mail on Sunday" and "The Sun" newspapers said that Johnson, 56, known for his busy love life, married Symonds, 33, at Westminster Catholic Cathedral, in the presence of close friends and relatives.

Johnson is the second British prime minister to marry during his tenure, after Robert Jenkinson, who assumed the premiership two centuries ago and married in 1822 while he was holding this position.

Johnson and Symonds had been waiting for months to tie the knot, after being forced to delay their plan last year due to the Covid-19 epidemic. They announced their engagement in December 2019. The couple has a one-year-old boy named Wilfred.

The Mail on Sunday newspaper reported that about 30 people attended the wedding on Saturday, which is the maximum currently allowed under measures to limit the spread of the coronavirus.

They were married by the priest who baptized their son, according to The Sun newspaper.

The marriage ceremony was a surprise after it was reported earlier this week that Johnson and his fiancée are preparing for a wedding that will be held on July 30 of next year.

Johnson has married twice in the past and has four children with his ex-wife, lawyer Marina Wheeler, with whom he separated in 2018.

When he was elected in 2019, Boris Johnson was the first British prime minister to live with an unmarried partner.

Symonds, the former Conservative Party chief of communications, gave birth to their son Wilfred, just weeks after Johnson was discharged from the intensive care unit, where he recovered from a serious infection with the Coronavirus.

The couple have been in the spotlight in recent weeks over an investigation into a scandal over the high cost of redecorating their Downing Street apartment.