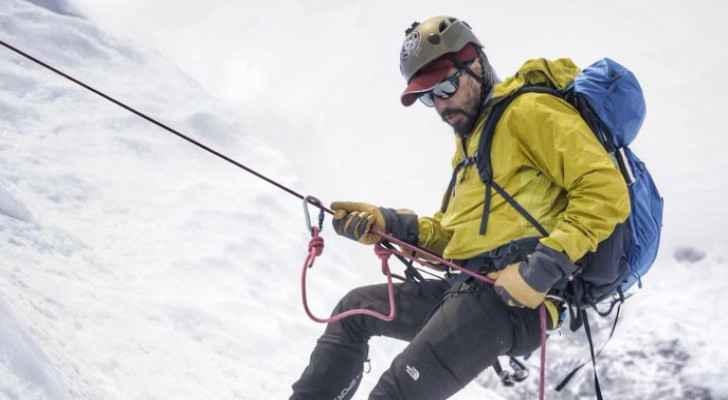 The Jordanian traveler, Alaa Al-Juneidi, announced the postponement of the Mount Everest climbing trip to raise the Jordanian, centenary and Palestinian flags on the summit, about two months after the start of the trip.

Juneidi said in a post on Facebook that the journey to reach the summit of Everest did not end, but was postponed for another year.

He added, "Unfortunately, we decided today to end the journey to climb Mount Everest due to the risks from the unexpected fluctuations in the air."

He noted the Nepalese government ordered them to also end the climb in order to spare their lives.

Juneidi emphasized, "We did our best to reach the summit, we reached 8000 meters, and the weather was also the reason for us to go back and we missed a better atmosphere, but unfortunately the weather is not present any time soon.."

He noted the adventure has not ended, but has only just changed.

Avalanches, cracking ice flows and deadly crevices are just some of the obstacles faced by climbers. The chief impediment, however, is extreme altitude sickness. The “death zone” is above 8,000 meters. The lack of oxygen can disorientate the most experienced climbers, with many perishing.

On April 9, Juneidi prepared to raise the flags, on top of Mount Everest. He started his journey from Queen Alia International Airport (QAIA) in Amman and was scheduled to arrive at his final destination on Jordan's Independence Day (May 25).

On April 27, he announced he was forced to change course due to a snowstorm.

Juneidi said while he was heading to the first camp on his trip to the summit of the world's highest mountain above sea level, a snowstorm wreaked havoc, forcing him to change his plans.

Sources confirm to Roya that Jordanian journalist was ....

Snowstorm forces traveler to change course in plans to ....