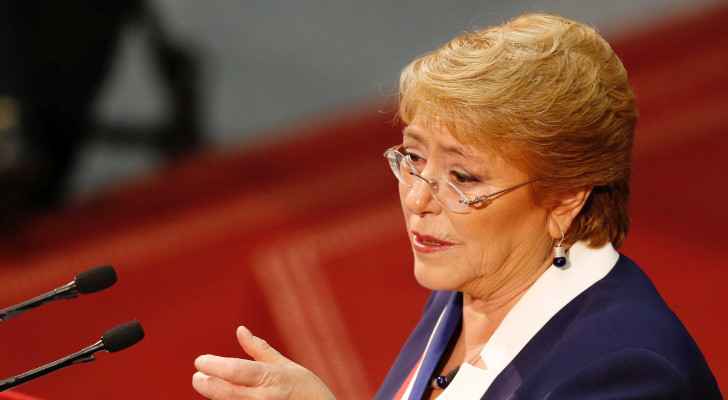 The United Nations High Commissioner for Human Rights, Michelle Bachelet, said Thursday that the Israeli Occupation strikes on the Gaza Strip may constitute war crimes, during an emergency meeting of the Human Rights Council to discuss the formation of an international investigation committee on the abuses that accompanied the recent conflict between the Israeli Occupation and the Palestinians.

At the opening of the emergency meeting to discuss the recent escalation between the Israeli Occupation and the Palestinians, Bachelet expressed her grave concern about "the large number of dead and wounded civilians," as a result of the attacks on Gaza.

"In the event that these attacks appear to have targeted civilians and civilian targets in an indiscriminate and disproportionate manner (...), they may constitute war crimes," Bachelet added.

"Despite the Israeli Occupation's claims that many of these buildings housed armed groups or were used for military purposes, we have not seen any evidence in this regard," the High Commissioner said.

She said that Hamas' rocket attacks "are indiscriminate and do not distinguish between military and civilian targets, and therefore resorting to them constitutes a clear violation of international humanitarian law."

As for the Israeli Occupation air strikes on Gaza, it said that it left "many civilians dead and wounded, and caused widespread destruction and damage to civilian property."

Between May 10 and May 21, 254 Palestinians were killed, including 66 children and a number of fighters, and 1948 people were wounded, and 12 Israelis were also killed, including a child, a girl and a soldier.

- The 'root causes' of the conflict -

The proposal goes beyond the recent conflict between the Israeli Occupation and Hamas, which controls the Gaza Strip, and requests that the committee examine "all the root causes of recurrent tension (...) including discrimination and systematic oppression on the basis of national, ethnic, racial or religious identity."

The research deals with "systematic" violations of human rights in the Palestinian territories and the Israeli Occupation.

The investigation will focus on “establishing the facts,” “gathering and analyzing evidence on these violations and abuses,” and “identifying those responsible (for them) as much as possible with the aim of ensuring that the perpetrators of the violations are held accountable."

Upon announcing the meeting, the Israeli Occupation ambassador, Merav Shahar, condemned the invitation to the session, saying that "this proves that this body has an anti-Israel program" and called on member states to oppose holding the meeting.

"Hamas started this conflict," the Israeli Occupation ambassador said, describing it as a "terrorist organization that glorifies death," stressing that the Islamic Resistance Movement "intentionally escalated tensions in Jerusalem to justify its attack."

The ambassador stressed that Hamas fired 4,400 rockets at Israeli Occupation cities, and Shahar urged the council not to "encourage or reward Hamas" for its behavior, stressing "Israel's right to defend itself."

Palestinian Foreign Minister Riyad al-Maliki responded to the Israeli Occupation ambassador’s statements, and told the council that Israel's practices are “consolidating its colonization.

If the text is approved, this will be the first time that the Human Rights Council establishes a commission of inquiry with a mandate whose duration is not predetermined, while all other investigative committees such as the Commission of Inquiry on Syria should renew their mission every year.

The council had previously decided to open eight investigations into suspected human rights violations committed in the Palestinian territories. However, the approval of this text would mean authorizing the investigation committee to examine the "root causes" of the chronic conflict, as well as the systematic violations that may have been committed in the Israeli Occupation.

It was not clear if the text would have sufficient support for approval.

Twenty of the 47 members of the Human Rights Council supported the request to hold the extraordinary meeting on the Palestinian-Israeli Occupation conflict.

The emergency session Thursday is the thirtieth of its kind since the establishment of the Human Rights Council 15 years ago.

It is the ninth session centered on the Israeli Occupation, which has consistently complained of bias against it in the Human Rights Council.

Hamas warns of new confrontation if ....

Government offices in Gaza to resume ....